Ok, I know this is more or less a fantasy site, but seriously, how could I not post something about V, the new ABC series based on the 1980’s mini-series of alien encounters, and mass human deception and manipulation! Not only was I a child of the 80’s, but I absolutely loved V, and loved it to completely unhealthy levels. Originally airing in 1983 and 1984, the V miniseries was a television sci-fi event that went beyond “regular” TV for me. It was shocking and scary and totally addicting.

So first of all, let’s compare cast members. I must admit that Joel Gretsch as Father Jack Landry bore a pretty solid resemblance to Marc Singer as Mark Donovan in the original series. I liked the bridge that that created between the old series and this 2009 version. The connection is important to me because it’s a remake of the old series, just with way better special effect and cinematography tools (cool alien ships, gross reptilian skin, fancy alien weaponry). 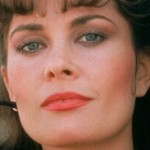 I’m not really sure that Morena Baccarin as Anna can really top Jane Badler as Diana though. First of all, Diana is a bad-ass name – I really wish they hadn’t changed it. On the hotness scale, I’d say they were neck and neck. I need to see some deep-seated primal, reptilian evil to see if Anna can truly compete with Diana. Only because I think I wanted to be a 10 year old version of Diana. Scary, I know. I’ll weigh in on the other characters once the series gets going. I do have to say though that I like the cast so far. Love Scott Wolf and Morris Chestnut!!

All in all, great start for the pilot episode.The action was fast-paced. The aliens were hot. The special effects were cool.  With this kind of acting, writing, and special effect features – it’s going to be a great season for this series. Can’t wait to see how the alien babies come out!