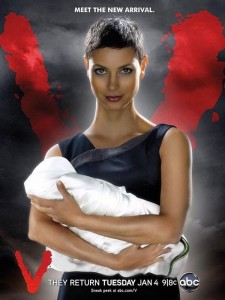 Ok fine, so it’s been back for a few weeks. I’m just late to the ballgame, and of course if you’ve checked the posts lately on ABC, you will notice that they’re not doing any online re-airing of V episodes this season. Fortunately for you, I’ve already vented my understandable rage toward ABC and am much calmer now. So from what I can gather, Jane Badler is back! She was the original Diana in the original V television series. She’s now back as Anna’s mother, which is very cool. Secondly, it looks like the mothers are switching up roles – with Tyler being mentored by Anna and Lisa being taken under Erica’s maternal wing. Tyler seems to be missing some critical DNA…obviously some dark genetic plan of Anna’s to merge some alien DNA into his incomplete strands.

There’s also a baby in the house…er…ship that seems to be growing very rapidly and Anna’s using her as a prod to make Ryan do her bidding. Heard that there was a gross bird-like regurgitation feeding scene between Anna and the baby in the second episode of the season, which I’m sorry I missed. Nasty! Anna also gave the baby an illness to coerce Ryan into helping her. I’m not entirely sure whether he is actually a double-alien-agent, or whether he wants his daughter back 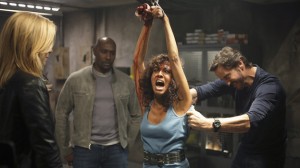 enough to double-cross the Fifth Column. Speaking of double-agents, in the last episode, Malik shows her true colors but Erica manages to overcome her with none other than Chad Decker’s help…looks like he may be Fifth Column material after all, instead of Anna’s little cabana boy. The Fifth Column torture the human skin off of Malik and she reveals some of Anna’s plans before she kicks the bucket, fangy mouth and all. 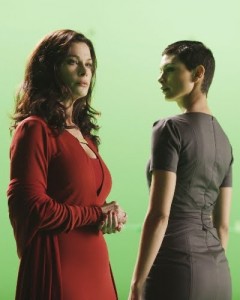 Meanwhile, Anna has come up with a plan on how she can squash human emotion, and she has Joshua (who by the way has no memory of his awesome Fifth Column self) develop a machine that can extract the human soul. This, of course, means lots of human test subjects who won’t survive yet another of Anna’s experiments. Lisa manages to convince Anna that she isn’t suffering from human emotion by torturing the first test subject of the soul-extraction machine. Lisa’s body is changing too with some scaly green discolorations on her skin as it prepares for fertility…and for breeding. Diana advises Anna not to trust her daughter, but Anna is too focused on taking over earth and carving her own path to heed her mother’s advice.

The episode ends with Ryan going back to Anna and announcing that he has found the Fifth Column. All I can say is that he better be playing Anna because it will be way too predictable if he turns against his friends. Plus it kind of sucks that the Fifth Column gets Chad Decker while Team Alien gets Ryan. Not exactly a fair exchange, is it?

V airs on ABC on Tuesdays at 9pm.

1 Comment on ABC’s V is back – alien teeth, hybrid babies, and all