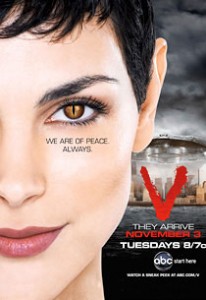 I continue to be excited by the new series on ABC – V. The second episode was pretty good! It didn’t leave me hanging from the awesomeness of last week, which was a great thing, and it kept the tension going. Big fan of the alien skin special effects – can’t wait to see more of those. I really like the interaction between the two main “goodies” Erica and Father Jack, and I am starting to get into Tyler a little bit more (he was a little annoying in the pilot). Scott Wolf is growing on me – LOVE the part where Anna calls him to say thanks and then hangs up on him. I like the cat and mouse nature of that relationship, maybe the mouse has a few more surprises for the cat in future episodes. So speaking of Anna, the best surprise for me was seeing that look of reptilian coldness she displayed for a few seconds after Chad Decker’s interview – now that was reminiscent of some old-school, Diana-esque ‘you-piss-me-off-and-I’ll-eat-your-guts’ looks from the original series. Me likey.

Looks like things are now going to start to get interesting, nice peek at the next episode’s attention grabber, “there can be no peace.” I am waiting with bated breath for episode 3.