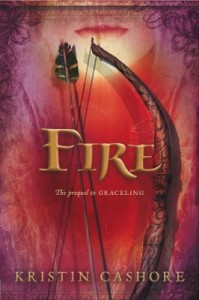 I was finally able to get my hands on Fire by Kristen Cashore, thanks to Amazon. It was AMAZING!

Kristin Cashore is a spectacular writer. I adore reading her books because of the flow, feeling and imagery. And I fall in love with her characters every time – you will recall my review of Graceling in an earlier post. In a similar manner, the characters of Fire just grabbed on to me taking me with them on their journey in the novel.

Fire is a companion book to Graceling, which means it is set in the same made-up world, just a different area – specifically on the other side of some really big mountains, and it keeps the link with Graceling by keeping one character, Leck (the bad guy from Graceling). So the brief story-line is that Fire is a girl who is a “monster.” She lives in a fictional place called the Dells that has been torn apart by war, its previous king under the influence of Fire’s power-hungry monster father, Cansrel. These monsters look very much like animals/creatures in our world except they have very bright, beautiful colors and most, if not all, are predatory carnivores. Fire is marked as a monster by her flaming red hair, which she keeps covered to minimize attention (and attacks from other monsters). With their hypnotic colors, they have the ability to lure prey (humans and other monsters) to them using mind control. Fire’s power in this regard is extraordinary, and unlike her father, she tries to use her power for good instead of for evil. Fighting off devoted attention from literally every single human and even the new King, Fire has to learn how to control her powers, deal with her growing feelings for Brigan, one of the princes, and help save the kingdom from evil plotters.

I loved the main characters, Fire and Brigan, as well as many of the supporting ones, like Brigan’s daughter Hanna or Fire’s father, Cansrel. I found the story to be well-thought out and exciting, keeping me interested. The idea of the monsters is truly a unique one, and I found that Cashore did a wonderful job executing the idea. I do have to note that I read mostly because of the relationship between Fire and Brigan – wanting to get to the point of where they would eventually get together. For me, I found that when they did, too many other things eclipsed the moment, and I felt that their love was overshadowed too much. I wanted MORE of  just them and I didn’t get it. The other thing that I want to note is that there are a lot of “relations” in this novel and quite a few pregnancies – maybe a smidge too much. Although in hindsight, the author probably emphasized this to highlight the fact that Fire took permanent measures to stop herself from ever having any offspring, which is a tragedy in itself.

The book, though easily understandable in terms of language, has many complex elements and plot twists which may make it hard to follow at times. I, for one, loved that it was so dense and complex. I really enjoyed the depth of this story, as this kind of complexity does help to make the story richer and broader than just a vanilla love story.

Fire is a romance with enough elements of action, drama, and fantasy to make it appeal to a wide range of readers. It is now one of my favorite books. Well-written and well-executed concept. I give Fire 5 out of 5 stars.