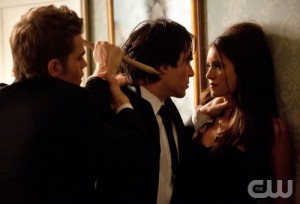 “You’re not going to kill her…because I am.”

Them be some big, bold words Stefan! But then, the promise of regaining the love of his life once Elena is out of the picture is a pretty big incentive. Without Elena’s knowledge and enlisting the help of Alaric, Jeremy, Caroline, and Bonnie, Stefan and Damon’s grand master plan is to entrap Katherine at the Lockwood masquerade and stake her. But Katherine has sneaky plans of her own and invites an old witch buddy, Lucy, to the party.

Lucy: What’s with the hair?

Katherine: I’m impersonating my dollish dishwater doppelganger, Elena. She has the worst taste.

Lucy (snidely): Except in men.

Meanwhile at the masquerade, Matt is on track to provoke Tyler to kill him now that Katherine needs another werewolf. Stefan meets up with Katherine where of course she demands the moonstone. He says no, and Katherine being Katherine starts her killing spree with poor Amy who only had the unfortunate luck to tell her that her dress was nice.

Katherine standing behind Amy: Poke. Paralyzed from the waist down. Poke. And now dead.

She definitely means business. Nonetheless despite a brief twinge of doubt from Stefan, the plan moves forward, and just as predictably, Katherine corners Caroline to find out where Stefan and Damon are 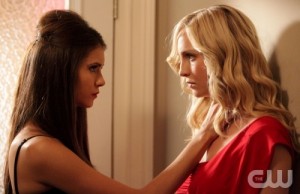 hiding the moonstone. Caroline, who I keep loving more and more with each episode, manages to trick the big boss lady, and gets her into the room where Bonnie has recreated the tomb spell, making her come face-to-face with her vampire ex-boyfriends. Without missing a beat, they start to lay some hurt down, but don’t celebrate just yet because Katherine (sneaky sneaky Katherine) has had Lucy put a spell on Elena so that Elena will feel everything she feels – meaning every cut, every bruise, every pain. Tables turned, people, tables turned. Although I am glad to see that Damon doesn’t lose his sense of humor…

Katherine: The three of us together are just like old times, the brother who loved me too much and the one that didn’t love me enough.

Damon: And the evil slut vampire who only loved herself.

Meanwhile, Matt throws down the gauntlet with Tyler by saying horrible things about his dead father, and they go to blows. Just as the fight escalates, Caroline shows up and throws a vamp elbow into Matt’s face knocking him clean out. But of course, Katherine is always two steps ahead and has compelled another person to finish the job if Matt fails. Another girl attacks Tyler, and in self-defense, Tyler pushes her into a desk, accidentally killing her. Operation werewolf complete. Absolutely loved the special effects when Tyler turns into the wolf – very cool.

Bonnie in the meantime learns that there’s another witch in the place, and tracks Lucy down. They have a witch/bitch I-don’t-want-to-hurt-you moment before Lucy tells Bonnie that she can trust her and convinces her to give up the moonstone. Lucy goes to the room with Katherine and the brothers, and gives Katherine the moonstone. Boy, did I not expect what happened next! The minute her hand touches the moonstone, Katherine crumples to the ground from some kind of spell. Awesome!

Lucy: You should have told me she was a Bennett witch.

Turns out Lucy is Bonnie’s cousin. Nice twist! I was expecting a witch showdown, but this way was much better and far less predictable. 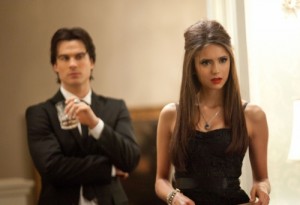 So basically Katherine is now out of the picture, and Damon seals her back into the tomb where she belonged in the first place, telling her that death was way too good for her. Cold, but sweet.

Meanwhile, the doppelganger Elena turns out another weak performance telling poor Stefan that she still can’t be with him because she “needs to feel safe.” Boohoo. After all that he’s done? Put himself on the line? Killed Katherine? Come on!

Anyway, Miss Moony gets kidnapped by some masked dude so no doubt the Salvatore brothers will be on the hunt to rescue the…er…dollish dishwater damsel in distress. I will miss seeing Katherine, that bouncy-haired trash-talking little siren, that’s for sure…really thought she gave Elena’s character some dimension. This week’s episode promises “new blood” so we will see what that means. Hopefully something good. But for now…bye bye Katie, have fun in solitary!