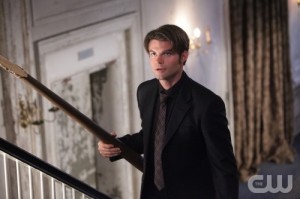 This is going to be part rant, part rave instead of an actual episode review of the Vampire Diaries, so consider yourself prepared. Seriously.

Let me begin by asking what are the two cardinal rules of killing a vampire? Staking. Check. Beheading. Check. And shouldn’t a vampire already know this? Especially if said vampire is trying to kill a vampire hundreds of years older than he is? I mean, come on! But no, the Salvatore brothers run out of there without even bothering to make sure superfast oldie vamp is really dead. And of course the mysterious Elijah is going to come back to life – he’s one of the “Originals” for Pete’s sake. Well at least he knew how to behead someone, with his fingers no less. That was cold (and gruesomely cool).

So seriously, he’s a bad baddie…and you don’t kill him? Like for good with the beheading? *Shakes head slowly.* Ok, I’ll stop rehashing this gross oversight. That was pretty much my rant, but it was a BIG one.

Moving on to the rave part…overall this was a good episode. I like the fact that they introduced new blood as promised as well as a more complex storyline. My girl Caroline keeps just getting better and better, and for a character that I didn’t really like in the beginning, she’s now one of my favorites. I love how she stands up to Damon, and love her interaction with Tyler. I also like the cool new twist of a potential relationship between the two of them. They have a lot of chemistry, and the whole concept of a relationship between a new vampire and a new werewolf will be interesting.

Tyler: How can you be a vampire?

Caroline: How can you be a werewolf? […]  Tyler, you can’t tell anyone. Not about you or about me. No one will understand. […] I need you to promise me no one will find out about us. This is life and death.

Tyler: I have no one else to tell. I’m alone with this.

They’ll be discovering things about each other, and that’s neat for the audience to experience with them. Still, it’s bold for Caroline to trust him because he’s not a character that we know very well, other than the mood-swings and bristly interaction with Jeremy. Can she trust him? Guess we will find out.

Moving on, my heart was breaking for Damon after he helped Stefan save Elena, and he’s standing there with the smile, but she runs into Stefan’s arms. Poor 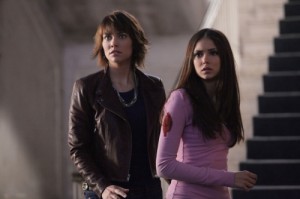 third wheel. It was cool though that she acknowledged him by mouthing “Thank you,” and he tells her “you’re welcome.” So with that, Elena’s managed to redeem herself a little bit in my book. She has to feel something for him, even if it is small, after everything he’s done for her.

The other scene I really enjoyed was the moment between the brothers when Stefan tells Damon that he was sorry for turning him. That seemed to be a real turning point between the two of them, especially after Stefan pointed out that they wouldn’t be able to protect Elena if they were fighting each other.

Stefan: I’m sorry…for being the guy who made you turn a hundred and forty-five years ago.

Damon: Enough Steph, it’s late, no need to rehash that.

Stefan: You know what? I’ve never said it out loud. I guess I just need to say it and you need to hear it. I’m sorry. What I did was selfish. I didn’t want to be alone. Guess I just needed my brother.

That may have been the driver for the next bit in the episode, which was the most awesome part and my absolute hands-down favorite scene…when Damon brings Elena the vervaine necklace that Elijah took off, and confesses his love to her before giving it back. *Swoon, and double swoon.*

Damon: I just have to say something.

Elena: Why do you have to say it with my necklace?

Damon: Because what I’m about to say is the probably most selfish thing I’ve ever said in my life.

Damon: No I just have to say it once, you just need to hear it. I love you, Elena. And it’s because I love you that I can’t be selfish with you. […] I don’t deserve you, but my brother does. Kisses her forehead. God, I wish you didn’t have to forget this, but you do.

Then in the next moment she’s standing there with the necklace on with no idea of what just happened,and he’s gone. Just freaking awesome! I can’t help hoping (beyond hope) that somehow she will remember what he said. Poor Damon…gotta love the bad boy wearing his heart on his sleeve.

The Vampire Diaries airs on Thursdays on the CW at 8pm. Bring it on Klaus, we’re waiting for you!

3 Comments on The Vampire Diaries – Rose