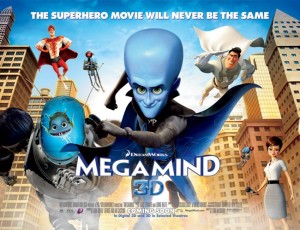 MegaMind, you had me at hello. Honestly, who couldn’t not love the big-headed blue evil genius? I loved everything about this movie, even though it’s really nothing new in terms of concept in the gray area of good versus evil, and baby aliens with special powers being sent to earth (Superman, if you’re struggling to make the connection). Rated at 68% on the Rotten Tomatoes tomatometer, it’s fresh and funny and has a great cast, including Brad Pitt, Will Ferrell, Tina Fey, Jonah Hill, David Cross, and Ben Stiller.

I adored MegaMind…in some sick twisted desperate way, I thought he was kind of hot. Maybe that was because he kept merging into Bernard, but I sure loved those green eyes of his! I think I fell in love with him from the first few minutes trying to fit in at the school (pronounced “shool”) for the gifted. He was so endearing and sweet and trying so hard that it just made me want to squeeze him! What can I say? I’m a sucker for the underdog.

So onto the synopsis: Two alien babies are placed in escape pods and sent to earth. One is handsome and 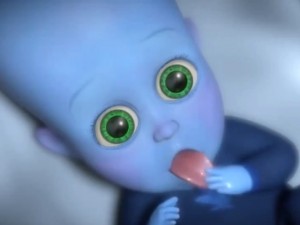 human-looking, and literally lands in the lap of luxury, while the other lands in a prison yard. Guess which one gets the orange jumpsuit? Growing up, MegaMind has always been on the short end of the stick, trying to fit in and always being the odd one out (notwithstanding the fact that he is blue and has a giant blue head) while MetroMan, on the other hand, can do no wrong and is completely adored.

MegaMind: No matter what happened, I was always the last chosen, the odd one out, the black sheep… the bad boy. Was this my destiny?… Wait. Maybe it was! Being bad is the one thing I’m good at! Then it hit me, if I was the bad boy, then I was going to be the baddest boy of them all!

An intense rivalry forms between the two especially at their “shool” and they become the expected arch-enemies. Eventually, MegaMind comes to realize that his place is at the head of all evil, while his nemesis, MetroMan, becomes the shiny revered hero of Metro City. Thus begins the dance of the supervillain and the superhero – the supervillain trying to rule the world, and the superhero trying to stop him.

MegaMind: Our battles quickly got more elaborate. He would win some, I would almost win others! He took the name, Metro Man, defender of Metro City. I decided to pick something a little more humble, MegaMind, incredibly handsome criminal genius and master of all villainy!

To add to the mix, there’s a hot reporter (the Lois Lane of Metro City, Roxanne Ritchi) smack dab in the middle of the two of them (got to have the hot chick with the smart mouth, right?) played exceptionally well by Tina Fey. In an unexpected twist, MetroMan fakes his own death during an attack from MegaMind, and Metro City is left without a hero. Finally, MegaMind wins, with Metro City in his villainous clutches. Chaos reigns supreme, but MegaMind finds that he is lonely without a hero to challenge him. He misses MetroMan! To solve the problem, he creates a superhero using MetroMan’s DNA, but the result is not what he expected (a flying Jonah Hill on steroids with flaming red hair who digs being evil instead of good). MegaMind finds himself having to be the hero to save Metro City (and of course the girl of his dreams, Roxy). All ends well with MegaMind saving the day, finally becoming the hero, and getting the girl. Then they all live happily ever after dancing it out to the ending credits of Bad by Michael Jackson. Classic. 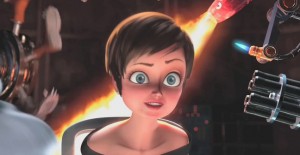 Awesome animation, as you would expect from DreamWorks, with a ton of action and flying scenes which are pretty cool. Some other neat characters like a piranha for his minion, named Minion, as well as an invisible car that kept getting lost. There was surprisingly a lot of comedy, especially from the sassy Roxanne, and the banter between MegaMind and MetroMan was fresh and hilarious.

MegaMind: In case you’ve noticed, you’ve fallen right into my trap!
MetroMan: You can’t trap justice! It’s an idea, a belief!
MegaMind: Even the most heartfelt belief can get corroded with crime!
MetroMan: Justice is a non-corrosive metal!
MegaMind: But metals can be melted, by the heat of revanche!
MetroMan: It’s REVENGE, and it’s best served cold!
MegaMind: But it can be easily reheated, in the microwave of evil!
MetroMan: Well, I think your warranty’s about to expire!
MegaMind: Maybe I got an extended warranty!
MetroMan: Warranties are invalid, if used beyond their intended purpose!
Roxanne Ritchi: Girls, girls, you’re both pretty! Can I go home now?

I loved the relationship between Roxy and MegaMind/Bernard. These characters in particular really drew me in, and had me rooting for the two of them – for

the hot girl to fall for the loser guy (because he’s beautiful on the inside). Awww, seriously  I am smiling just thinking about it. See what happens when you fall for for silly animated characters!! Will Ferrell was brilliant as MegaMind, whose character was so complex that you couldn’t help but connect and care for him. I loved how he was so obviously intelligent (evil genius!) but at the same time he couldn’t help being a total lovable dork, messing up in funny ways, especially with pronunciation of words, like “meh-trocity” (like atrocity) for Metro City or “melONcholy” for melancholy. It just made me love him more.

Albeit predictable in plot and not as flashy as some other animated films, MegaMind has a ton of heart. I felt satisfied when I left the theater, and these days, that’s all that counts. I’d rate MegaMind 4 out of 5 stars for pure feel-good family fun.