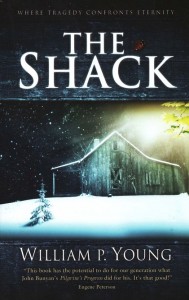 I had the profound pleasure to attend an evening speaking engagement by the author of The Shack, William Paul Young, yesterday. The event was organized by Christi and Rob Gebhart, along with The Westchester Community Group, and had over a hundred attendees from all walks of life – young, old, broken, whole, secular, religious, anyone looking to hear from the person who wrote this book that reaches into the lives of millions. You may recall that I wrote a review of The Shack with the thought that the message is so broad that anyone can connect with some part of it. I rated it 5 stars. Originally self-published, The Shack was a fictional story that was meant only for the eyes of family, but somehow became a phenomenon and managed to reach the lives of millions of people.

Paul, as he prefers to be called, is an unassuming man, short in stature but big in affection. I must have received four or five lengthy hugs yesterday, and he made it a point to hug almost everyone who spoke to him after he spoke. I’m not talking about perfunctory hugs either, but long, meaningful ones. He’s not the world’s most persuasive speaker, but he connects. His story, the one that drove him to write The Shack, is raw and gritty, and at times, very hard to hear. I cannot imagine having to say it and lay yourself bare to so many people. That takes courage, especially from a man who hid those secrets from everyone, including his wife, inside his metaphorical shack for many many years.

According to Paul, The Shack started out as a request from his wife, Kim, to write down a few words for his children that could show them the kind of man he was. She meant it to be four or five pages, and instead it turned out to be a little bigger than that. I’m not going to go into Paul’s story (as hard as it was to hear parts of it, it’s just as hard to write them here), instead I will just say that the man lived through years of abuse and misery, calling himself a “predator” at age six. It wasn’t until Paul saw his own son, at age six, standing in front of his fireplace one day that it hit him – this boy, this child, was six. Just six. How could this little boy ever be guilty? That was just one of the pivotal moments in Paul’s life that drove him to forgive himself, but the real hurdle came when his wife discovered that he was having an affair with her best friend. It was the biggest betrayal, and Paul realized at the time that he had to choose…between killing himself or facing his wife. He chose the latter, and what followed he said were the hardest moments of his life, when he said to Kim, “if we’re going to do this, you have to know all my secrets,” i.e., all the fiercely guarded secrets of Paul’s shack. After he told Kim everything, she couldn’t believe he was the same man and she wasn’t sure she could ever trust him. In the end though, Paul sought the help he needed and did what he had to do to save himself and his marriage. It was a hard road, but he knew that he couldn’t give up.

Everyone has a shack…a place inside of them where things are hidden, where shame reigns as king. Paul’s was worse than most, but I’m sure there are many others out there with stories of the same ilk. Paul said something that particularly stuck with me – shame causes you to confuse an observation with a value statement, so for example, when his wife told him that he needed to sort the whites and the darks (laundry), he heard ‘you’re a failure and the worst husband in the world.’ I can’t even tell you how many times I’ve done that in my own life – heard an observation and translated it via my own shack into a negative value statement about me.

The other message I took from Paul was about relationship. I love the idea about the Trinity (the Father, the Son, and the Holy Spirit) and the fact that there is a real relationship between them because that means that love is truly something shared. There’s no one singular entity, but this relationship between three entities with us in the midst of that love – it’s incredibly powerful stuff. “The friendship is real, not merely imagined. We’re meant to experience this life, your life, together, in a dialogue, sharing the journey.” In Paul’s words, the understanding of God only comes from an other-centered relationship.

This was an experience I won’t soon forget. I’m not sure what I expected going in other than a speech from an author talking about his book, but I certainly didn’t expect to connect with him as much as I did. That said, when I read my previous review of The Shack, I know that I shouldn’t be surprised at all. It makes sense that if he connected with me in the book, that he would connect with me in person. He reached me again, and I also realized something else that I don’t think I understood before. The shack doesn’t just relate to Paul alone; I have a metaphorical shack too, one haunted by my own personal demons.

I’ll end this article with one other thing Paul talked about when Mack was speaking with Jesus, and Jesus said that he couldn’t condemn the murderer because he loved him also, as he did all his children. Paul said he was speaking at a women’s prison, and a woman came up to him afterward and asked him whether He loved her too. Paul replied, “he especially loves you.”

The Shack isn’t a book that preaches about religion or God. In fact, many communities across the world hailed it as heresy. It is a work of fiction, one that details a man’s struggle to face his inner demons, or his Great Sadness as he calls it. In Paul’s words, the story, like a parable, is true but not real. It is a conversation, a dialogue, and a healing. Through his relationship with three people (Papa, Jesus, and Sarayu) inside The Shack, he is able to find “more power in love and forgiveness than hate,” and finally find a measure of peace.

See this article in TheLoop, a local Westchester newspaper.

1 Comment on A chat with William Paul Young, author of The Shack