Katie, Katie…looks like you may have a little human side after all. Or maybe not. “Better you die, than I.” Always looking out for number one.

So the new big bad, Klaus, supposedly makes Elijah look like “the easter bunny” according to Rose whose fear of Klaus is quite melodramatic at times. I’m now picturing a vampire easter bunny with fangs, and it’s actually quite funny, kind of Donnie Darko gone rogue. But I digress. The second thing I’m picturing is Rutger Hauer as Klaus. You may recall that he played Lothos, the Vampire King in the original Buffy the Vampire Slayer. Anyway, they are building Klaus up so well that he better be somebody good, cast-wise I mean. 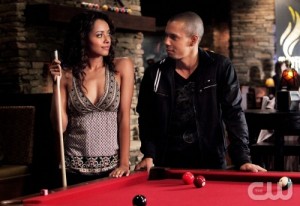 Ok, so what is with Bonnie flirting with new boy right in front of Jeremy. Not cool. The guy always gets the girls with baggage, what is with that! First Vicki, then Anna, and now Bonnie. Seriously? Plus, not sure how I feel about the whole addition of warlocks to the plot. It’s cool but I’m not totally convinced yet. Luca’s dad is definitely not a goodie…way too many questions and weird eye looks between him and Luca.

Moving on. It was super creepy when Katherine stumbles out of the cave, all starved and zombie-like. I liked it, and I love that Elena coerces her with blood to get her to talk about Klaus. Katherine tells her in reluctant admiration, “You have the Petrova fire.” So according to Katherine, the curse of the sun and the moon was bound using the blood of a Petrova, and the doppelganger was created to undo it. Klaus wants to break the curse by sacrificing the Petrova doppelganger, which initially was Katherine…and now it’s Elena. We also learn from Katherine that Trevor who got polaxed by Elijah in the last episode was the one helping Katerina escape because he loved her. But Katherine being Katherine didn’t want to die, and tricked Rose into giving her some of her blood and then she killed herself…forthwith, enter Katherine, the vampire.

Katherine: Klaus, needed a human doppelganger. As a vampire, I was no longer any use to him.

Rose: You have just signed our death sentence.

Katherine: Better you die, than I.

I am also loving the Rose/Damon sexual tension – I can guess that something’s going to happen between those two. Love that Rose doesn’t take any of his crap, and sees through all his bravado right away. “I’m older and stronger than you, so don’t get on my bad side.” 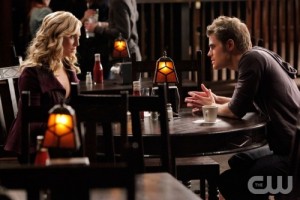 Not too much Caroline in this episode although she is playing her usual role of distraction by not allowing Stefan to find Elena who is secretly in the tombtalking to Katherine. She still has a couple notable one-liners.

Caroline to Stefan (at restaurant): Sorry to drag you here, but if I don’t eat, I get those kill innocent people urges.

Meanwhile Damon goes with Rose to meet her contact Slater who can potentially lead them to Klaus. He offers up some new information on the curse, and why Klaus wants to break it. 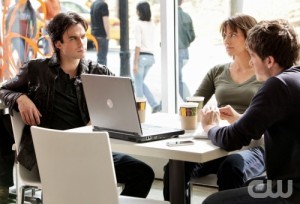 Slater: If a vampire breaks the sun curse, then the werewolves are stuck with the curse of the moon forever, and vice versa.

And drumroll…Elijah is back! Very ominous with the coins but nice effect when he smashes the glass just as Damon is asking Slater how to destroy the moonstone. Love the power, especially now that we know that he’s the easter-bunny compared to Klaus. Again, a lot of build-up…I’m just saying…could get ugly if Klaus doesn’t measure up. This is even before they segway into the murder of Katherine’s entire family to show how vengeful and evil Klaus is.

Back to Katie and Elena in the tomb, according to Katherine, to break the spell, they need the moonstone, the doppelganger, a witch to do the spell, a werewolf and a vampire. So Katherine’s plan was to do some kind of trade with Klaus, and sacrifice the doppelganger (Elena), the witch (Bonnie), the werewolf (Tyler), and the vampire (Caroline)…basically all the majors of Mystic Falls to break the curse. Then Stefan shows up in the tomb and tells Elena that she can’t trust Katherine, but Katherine has no reason to lie. He accuses her of wanting to trade the moonstone for her freedom, and calls her a psychotic bitch. Love Katherine’s response…the real Petrova fire in action.

Katherine: My freedom? That’s where you’re wrong, Stefan, I don’t want my freedom, because when Klaus shows up to kill us all, and he will, I’ll be in the tomb where no vampire will enter because they can’t get out. I’ll be the safest psychotic bitch in town.

So put that in your pipe and smoke it, Stefan! 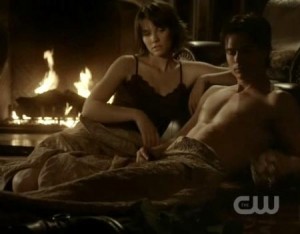 Moving on to Damon and Rose…TOTALLY CALLED IT!!! Even though it was fleeting, I knew that those two had to get it on. Predictable but good. Damon needs to stop mooning over Elena for now. Speaking of, another overdone crying scene in the end by Elena, but what’s new? “It’s all my fault, blah blah blah.” We get it. Suck it up, and stake some vampires already!

The episode ends with a call from Slater to Rose on how to destroy the curse, telling her she needs to get the moonstone, and a witch. I knew that Elijah was in on it, and sure enough, he was compelling him. He even compels Slater to stake himself. I also knew that Luca’s father was bad, but the fact that he is in league with Elijah is definitely not good.