So thrilled to share the recent VOYA review for my novel ALPHA GODDESS!! After the Spring Kids’ Indie NEXT pick earlier this spring, this is fantastic news! 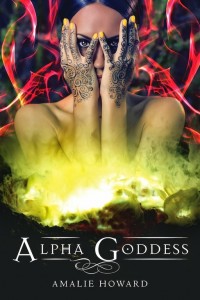 This book holds such a special place in my heart. I mean, all my books do, but this one is a little different. It’s the only novel where I chose to write using source material from my childhood — specifically Hindu mythology. I grew up in a Hindu household. My father is a Hindu priest (a pundit) as was his father before him along with generations of Gosine (my maiden name) males. I’m of East Indian descent on my father’s side and Middle Eastern/East Indian/French descent on my mother’s. How’s that for a diverse ethnic mix? I grew up in a multicultural, multi-religious, multilingual home.

When I wrote Alpha Goddess, I knew it was going to be a different kind of story that heavily leveraged my Indian background. I wanted to bring something fresh to the table—something that hadn’t been written about, but would appeal to YA readers. As a child, I was lucky to grow up with a different kind of mythology, one steeped in East Indian culture. Inspired by another tale of star-crossed love—the epic tale of Rama and Sita—I decided to focus on that mythology as the foundation for my story. Known as the Ramayana, it is a timeless Indian love story in which prince Rama and his wife Sita were tricked from the throne and sent into exile, where Sita was stolen away by a ten-headed demon, Ravana, who tried to convince her to marry him. However, her love Rama came to save her, battling the demon to the death with the help of the monkey-king, Hanuman. My retelling begins with a fictional account of how Rama and Sita find each other in another future lifetime—this time within the world of Alpha Goddess in a contemporary setting. I wanted to remain true to several key elements of the Hindu mythology, but I also wanted to use my creative license to really make this story my own, which is why you will also see many different ethnic and religious elements from other cultures incorporated into the story. It is a work of fiction, after all.

[Partial excerpts above taken from my article for the blog Diversity in YA: The Diversity Dilemma]. Click to read more.

Just like any other teenager, Sera wants her parents off her back. She knows that her best friend, Kyle, drives them crazy with his tattoos and mohawk, but he is the only person willing to be friends with the freak that everyone else thinks she is. Sera has no idea that her parents are protecting her from a big secret: she is a Hindu goddess reincarnated. Sera’s very existence is a threat to the balance of good and evil, and her parents (not exactly human themselves) are just trying to keep her out of the hands of those who would use her to fulfill their own greed.

Although the plot is nothing new (“Surprise! You’re a [insert supernatural being here]!”), the depth of Howard’s description of the Hindu deities is a refreshing change. The book addresses some of the feelings that Indian Americans must experience while growing up in towns with little diversity and also touches on some subtle racism. Howard is Indian American herself and is thus able to give a voice to a growing teen population. Alpha Goddess is a touching depiction of the strength of family and the importance of love and loyalty. Fans of books blending the modern with the mythical will enjoy Sera’s story and the love triangle involving her best friend and her immortal love.—Kate Conklin.