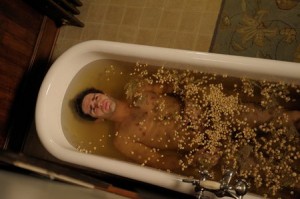 “Even a monster can be afraid of the darkness.”

Talk about a telling title for this Being Human episode – I see your true colors and that’s why I hate you? Not sure that Cyndi Lauper would be too happy about the butchering of her awesome 80s song lyrics. But I’m dating myself, so just ignore that snipe.

And yes, that’s totally Aidan soaking in a tea-bath in the photo inset. But we’ll get there …

So the episode starts off with Sally and her only agenda in life – to break Brigitte and Danny up before Danny hurts Brigitte. Despite her efforts, Brigitte won’t listen and basically tells Sally to leave her alone. She doesn’t want to believe what Sally is saying about Danny. Sally is devastated but there’s nothing that she can do.

Aidan to Sally: You were strong before Danny derailed you, and you know what he is now. And he can’t hurt you anymore. 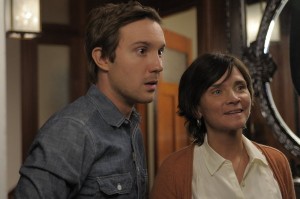 Meanwhile, Josh goes home with his sister, only to find out that he’s the cause of his parents’ separation. On top of that, Emily gives them Josh’s journal which has all this information about werewolves. Josh’s dad walks in with a hilarious, “so how long have you thought you were a werewolf?” There’s this hilarious scene where Josh backpedals like crazy saying that it wasn’t a journal, but they were all notes for a graphic novel he was working on about a guy who thinks he’s a wolf. It makes a sort of crazy sense, and they let it go.

Then we’re back to Sally, and she decides to scare the crap out of Danny, only we realize that Danny is far more the monster than we’ve ever thought. He’s not even afraid of Sally’s supernatural display of cracking lights and flickering television. Instead, he beats her down just as he used to when she was alive.

Danny: You’re more pathetic as a ghost than you were alive. And that’s pathetic. […] You don’t scare me because I know you’re nothing. You’re dead. And I’m alive. And I’m happy, finally.

He’s a cold one, that guy. And creepy. Way more creepy than any of the real monsters. Ok, maybe not Bishop. Still, I didn’t like how easily Sally left, but it gave me an idea of what their relationship had been like in real life living with such an abusive boyfriend. 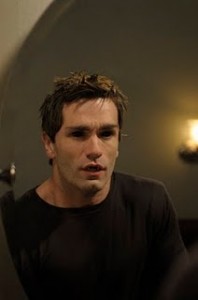 Meanwhile, back at Josh’s homestead, Aidan shows up since he knows that Marcus is up to no good and wants to get back at Josh. Unbeknownst to him, he eats some of Josh’s mother’s food which has a lot of garlic in it, and what follows was equally as hilarious as when Josh spins his yarn about his graphic novel. Aidan lurches off the table, and is all fangs and black eyes, and acts like he’s totally drunk. I was laughing so hard, I think I broke a rib. It got even better when he made himself some kind of herb tea bath, gets naked in front of Josh, and douses his entire body in it.

Things get worse as Marcus shows up and everything suddenly jump into serious (as in no giggles) high gear. There’s a great fight scene between Aidan (who’s cured by the tea) and Marcus in Josh’s backyard, and then Marcus takes off. Josh ends up telling his parents that he was actually a werewolf, and they all take it remarkably well. I was a little surprised by that actually … their reactions just seemed weird to me.

Sally tries again to tell Brigitte about Danny, and possesses Brigitte’s body to write a note saying, “he killed me.” It was pretty cool, and freaky. Brigitte confronts Danny, but of course, he cleverly and deceitfully lies his way out of it. Even though he can’t see Sally, he stares in her direction with this really evil look when he gets Brigitte to believe him. Like I said, very very creepy guy. Hope he gets what’s coming to him. Eventually, Brigitte goes back to the house and tells Sally that she needs to move on, and she just wants her to leave her and Danny alone.

The episode ends with Marcus driving off to some obscure barn in the woods with a weird old lady guarding some people Marcus wants to meet with. I assume that they’re going to be some kind of older vampires, and Marcus is trying to go over Bishop for some reason or another. Not sure that’s a smart move, but it will be cool to see who they are.

Being Human airs on Syfy at 9pm on Mondays.