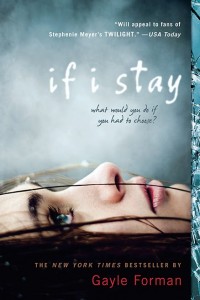 I bought if i stay at a bookstore, drawn by the USA Today blurb on the cover that fans of Twilight will enjoy it. After reading this novel, I can’t say that I agree with that statement because this book is not really a book like Twilight. Yes, it is a book about death and being caught in that space between life and death, but it is not a paranormal romance story. This book is a very real and raw portrayal of life, loss, family, and love. While I have enjoyed the Twilight series, I would probably have to say that maybe older readers would enjoy this book as opposed to the younger Twilight fans.

Mia is a talented seventeen year old cellist who has dreams of going to Julliard. She has a boyfriend, a cool family, a best friend, and a pretty decent life. However, one day all that changes when Mia and her family get in a horrific car crash. The only survivor and stuck in a coma, Mia is caught between a world between the living and the dead. She’s not a ghost, she’s sort of stuck in limbo. Shaken and alone, Mia has to make the decision whether she’ll let go of life to join her parents or whether she’ll stay in this life without them and one that will never be the same. if i stay is a poignant and raw story of Mia’s journey and eventually the final decision she makes, weighing all of the pros and cons of staying or going. The story is narrated from her point of view as she watches the doctors operate on her battered body, listens to her family and friends as they come to the hospital, and flashes back to her past memories of all of them, including her parents.

The combination of present-day thoughts together with the memory flashbacks translates into a uniquely-told story of Mia’s internal struggle to choose: life or death. It’s a bit of a cliche because choosing death would obviously be the easy way out, while life would inherently be a harder choice. But maybe that’s the question that gives this book its allure. What would you do, given such a choice?

if i stay was beautifully written, and I enjoyed the narration of past and present (I know some reviewers thought that was too jarring). It definitely fleshed out the story and gave Mia some more dimension as a character but to me it was also a double-edged sword, since the flashbacks into Mia’s family and friendships as well as her relationship with her boyfriend made me connect with them more, instead of with Mia. It just felt like sometimes she was too detached, then again, maybe that was intentional as she is in limbo herself. She’s not real anymore, instead she’s like a memory of herself.

Actually, writing that got me thinking a bit – maybe Mia’s state of mind is a reflection of what she is and of the place she’s in. See? This is why I love books that make you think about them long after you’ve read them!!

Overall, I would rate if i stay 4 stars. Interesting read, and definitely gives you food for thought, especially about life and death.