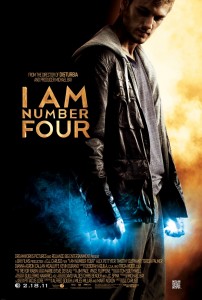 Despite lowish ratings from critics on the Rotten Tomato tomatometer of 32%, audience-goers still voted I am Number Four as a “go-see.” I had to see it because I love fantasy and it’s my kind of thing. Overall, I really enjoyed it. Although it started slow and took a while to find its pacing, I am Number Four is based on a pretty cool story and had some awesome special effects, especially in the fight scenes at the end. With many core elements from Superman and similar visual effects to Race to Witch Mountain, it’s nothing new in terms of plot, but it was still a fun flick with some interesting characters.

John Smith is one of nine children sent away to earth from their planet Lorien, after a destructive race called the Mogadorians, annihilate it and all their people. However, the Mogadorians track down the Loriens hiding on earth, and execute them in numerical order. John is Number Four. After each Lorien child is killed, a scar appears on each of the other’s calves, letting them know that one of them has died. Like the others, John and his protector, Henri, have to keep moving to constantly avoid the Mogadorians. They end up in a small town called Paradise, Ohio where John falls for a girl there. He also starts to discover all of his powers (known as legacies) and makes friends with a nerdy (and human) boy whose father disappeared while working to bring the remaining Loriens together. Paradise starts to become more of a home to John than any other place he has lived. So basically when the Mogadorians show up, this time John refuses to leave. Meanwhile, Henri gets killed in an unfortunate trap, but John gets a new friend with the spectacular appearance of Ducati-riding Number Six. Enter the big stand-off with the Mogadorians. Number Four and Number Six team-up, combining their powers to defeat them. The movie ends with Number Four and Six activating a special tracker and leaving to find the others. 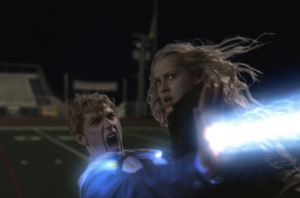 I am Number Four does have some flaws, most of which are plot-centric like not enough back story on Lorien and the Magodorians (which are explained in the book), and plot incongruities like how does Henri managed to get kidnapped by human alien-conspiracy theorists when he’s supposed to be this awesome guardian or where are all the police when they are having this mass fire-storm in the middle of the high-school at the end? That said, the action scenes are what make this movie a go-see. They were pretty awesome, especially the legacies of Number Six when she zaps in and out of human form. To me, the movie really started to amp up when she entered the picture, blasting through the high school doors like an avenging angel. Awesome!

The blasters used by the Magodorians were cool, and the giant shape-shifting dog was strangely reminiscent of Falcor in The Neverending Story. The Mogadorians reminded me a little of the shark-toothed angels/demons from Legion, and I thought they worked well as the evil villains in the movie (apart form the face, their imposing size also reminded me of the baddies from the Superman franchise). I especially enjoyed the humorous parts with them, like when one of them went grocery shopping. They were scary but funny-looking at the same time. 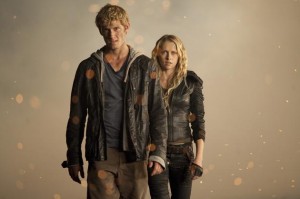 Overall, I am Number Four was good fun. There were some really spectacular action sequences, and pretty decent acting. I felt engaged by the main characters, and was invested in what happened to them (funnily enough, especially the cute little nerdy dude). The story was good, especially since it paralleled proven successes like Superman and Galaxy Quest. Um, just kidding about Galaxy Quest. Lastly, I liked the understated romance between the John and his human girlfriend, although it did seem to progress extremely quickly. But I guess sparks fly at this age, and according to the movie, when they Loriens know, they KNOW.

Most people who enjoy young adult books and movies will probably enjoy this film. Teens will undoubtedly like it, if only for the … um … hotness of its main characters. I would rate I am Number Four three out of five stars.