You’re being a martyr. That’s not heroic. It’s tragic.

Bold words to the queen of everything on the Vampire Diaries, Monsieur Stefan! But still, Stefan should know about martyrdom, after all, he’s the king of broody self-sacrifice. Despite what she has already read in the journal about his earlier extracurricular vamptivities, Stefan takes it upon himself to tell Elena about what a bad vampire he used to be, as in “Hunt, Prey, Kill,” and how Lexi taught him about self-control and how to not lose his humanity … how to hold on to love. Awww. 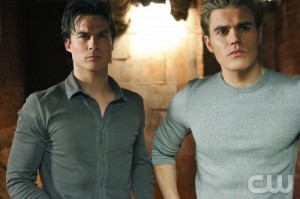 Good to see that Damon is back to his old tricks of trying to get rid of Elijah, now that the werewolves are out of the picture.

Stefan: Trust me, Stefan. I m going to dot all my T’s, I don’t want any surprises.

Damon: Wow Damon, are we actually going to be careful for once?

Stefan: Yes Stefan, I’ve become you. How tragic for both of us. Gotta run, have a  murder to plan. Busy day.

As part of the grand master Original-killing plan, Damon gets his girlfriend to plan an impromptu dinner party, so that he can kill Elijah. But first, he goes to see Katherine to confirm that what John Gilbert told him about the dagger and the white oak ash is true – that it can kill an Original. It was cool to see Katherine all mummified when Damon goes to her in the tomb before giving her some blood. She confirms that it is possible to kill an Original, but begs him not to because she doesn’t want to remain in the tomb forever. Damon of course, doesn’t listen.

The dinner party goes on as planned, however Uncle John shows up as an uninvited guest, and Elijah has an ominous warning of his own to Damon.

Elijah: If you have less than honorable intentions about how this evening is going to proceed, I suggest you reconsider. […] Because although Elena and I have this deal, if you make so much as move as to cross me, I’ll kill you, and I’ll kill everyone in this house. Clear?

But Damon being Damon doesn’t take kindly to threats, and he is just about to make his move on Elijah in his study when Stefan calls Alaric and warns that if Damon stabs Elijah with the dagger, they would both die. Only a human can wield the dagger to kill an Original. So two bloody deaths circumvented, we’re back to the dinner table, when Alaric makes a shocking move of his own and stabs Elijah through his chair and through the heart. Definitely didn’t expect that one! Go Rick!! 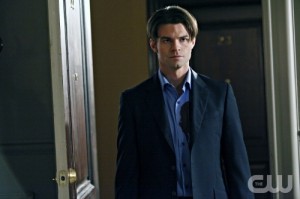 Unfortunately, they realize too late that if they remove the dagger, Elijah won’t stay dead. So that means that the deal’s off and Elijah’s pretty mad, telling Jonas (Luca’s dad) that he has to find Elena. Meanwhile, Bonnie and Jeremy are doing some channeling and romance together, when Jonas bursts in and takes her magical power for her “own good” he tells her.

Elijah locates and confronts Elena at the lake house.

Elijah: The deal’s off.

Elijah: You have nothing left to renegotiate with.

She pulls out a knife, and threatens to kill herself, telling Elijah that Stefan will heal her and she’ll become a vampire just like Katherine did. She asks him once more to promise not to harm anyone she loves, even if they’ve harmed him. But instead, Elijah calls her bluff,  and surprise, surprise, Elena stabs herself. Elijah’s expression was classic, going from smug smile to genuine panic in the space of a heartbeat.

Elijah: Yes, you can have your deal. Let me heal you. I give you my word.

She stumbles out into his arms, and second surprise, surprise, she stabs him with the ash-covered dagger! When he falls to the ground, Stefan rushes to heal Elena, and Damon steps out from around the side.

Meanwhile, Jenna and Alaric end up breaking up because he can’t tell her about Isobel, especially after what John started up. She leaves, while John walks in (sneaky bastard that he is) and tells Alaric that he can clear everything up, but he wants his ring back. Alaric’s so cool, he takes the ring off and says:

Alaric to John: You want it? Take it, it’s yours. And after what you did to damon, you’re going to need it more than me.

Episode ends with an unexpected twist – Damon discovers a naked Elena…oops, sorry, it’s Katherine, in his shower. Seems like when they killed Elijah, his compulsion on Katherine wore off. Sneaky Katherine, lying to Damon about being stuck in the tomb forever. She tells him that she knew that if he she told him not to kill Elijah, he would. So, she’s now out of the tomb, but she tells Damon that she’s didn’t run, she’s going to help him. Classic … the former doppelganger is back in the mix. Exciting times ahead because as we know … Katherine only looks out for Katherine.