So this whole episode of Being Human is basically about Josh’s new werewolf tutor, Ray, who vacillates between being a harmless spacey older dude and a psychotic vampire-hater. That said, he has come in very handy in teaching poor clueless Josh the ropes of being a werewolf and how to take charge of his life. 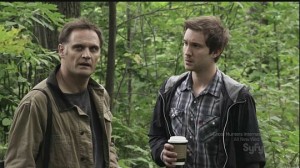 Ray: You know you suck at being a werewolf. It’s almost offensive. Name’s Ray. I’m a werewolf too.

Josh shows up at the apartment wearing some of Ray’s old clothes, and of course Aidan is quick to poke some fun. Loving the one-liners in this episode.

Werewolf school 101 is awesome. Loving Ray so far because this is the harmless spacey dude phase. It was cool when he gives Josh the whole werewolf change checklist, comprising of a change of clothes, wet wipes, disposable cell phone, water, pb&j (you know, in case the wolf didn’t eat half a cow).

Ray: A wolf stomach processes food different than a person’s. First few times after changing, I found myself throwing up all the animals that I’d eaten. Wolf would chow down on some crazy stuff. That ever happen to you?

Josh (sheepishly): I think the wolf eats its own poo.

Ray teaches him to pull a rump roast around a in a circle so that the wolf tracks it down, spending its time looking for the roast instead of hunting live animals. 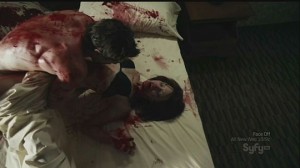 Rebecca’s back in the picture asking for Aidan’s help to get out, claiming she hates who she is, who she’s become. Not sure I trust her. Aidan and Rebecca’s … er … coming together was a little gross. Meanwhile, Aidan wants to help her (since he got her there more or less), but he’s finding himself struggling to hold on to his own rules. They engage in a vampire-eat-vampire buffet. When Aidan tells Rebecca that “blood leads to blood lust, blood lust leads to blood shed,” Rebecca basically calls him out on saying that to her, telling him that he was the one who needed to bite into flesh far more than she did. I still think she is lame, and probably just wants a booty call. In a blood lust, Aidan and Rebecca almost kill some random guy. She decides Aidan’s lifestyle is too hard and takes off.

Rebecca: I can’t go to a restaurant and pretend to be human when all I want to do is eat the table next to me. I’m not that strong.

Meanwhile, Ray moves in to the apartment. He’s Josh’s new BFF. But now, he starts to show his true colors, getting a little more shady and telling Josh that they can take on the vampires at the full moon. He gets in Aidan’s face, threatening him in his own house, and throwing out his stash of blood.

Love when Josh tries to turn it on with the blond nurse (mimicking Ray’s pick-up lines and wolf-mojo with a dive waitress), and says that he hopes they will end up “sexing in bed.” But she turns around and tells him that she’s too busy to go to HR, but if he talkes to her again, it’s his ass. I laughed my head off. That was hilarious.

Ray is one sick dude. This is definitely the psychotic vampire-hating phase. Supposedly, the night before they change into the wolf, they are super-strong and can take on vampires. Nasty how he tells Josh, “Ready to pop some ticks?” just before they jump on a vampire on a blood-high. Josh gets in a fight with Marcus and beats the crap out of him. He’s all freaked out but Ray’s getting under his skin, whispering in his ear and telling him that he knew it felt good.

Forgot to mention that Sally decides to stop undermining Danny and Bridget after Aidan tells her that everyone deserves a chance to be happy. She basically tells Bridget that she’s ok for them to be together. Thank God. Her stalking was getting a little creepy. Oh wait, she’s a ghost. Never mind.

Josh is really now starting to get interesting – like seeing him with some bite. Next week episode look awesome!

Being Human airs on Syfy on Mondays at 9pm.