Immortality. What’s not to love? There’s just one thing they leave out of the pitch. Time, that endless sucking time. […] Memories, those haunting memories. […] And realize there is only one true thing—it is impossible to live forever perfectly. […] So go ahead, live forever. Forget what you’ve forgotten. But they won’t. They never do.

Being Human (the US edition) is still stretching its legs. Things are getting more exciting as the 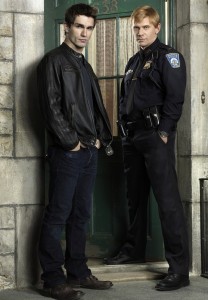 three roommates get in the swing of “normal” living, or trying to live normally, anyway. Neat scene of Aidan brushing his teeth, trying to be like any other normal human even though he doesn’t eat, but he tells Sally that it’s “to maintain appearances.” In another surprise move, Aidan decides to become part of the neighborhood watch, and invites all of his neighbors into their home for a meeting. Naturally, Josh freaks out. But that isn’t the worst part, one of the people in the watch happens to be the son of one of Aidan’s victims years before. He corners Aidan later on and impales him in a drunken fight through the stomach onto a piece of pipe. I almost jumped out of my skin when Aidan starts screaming, all fangs and black eyes. That was cool. Bishop, of course, wants to step in and save the day with his own clean-up, but Aidan wants no part of Bishop or his vampire “family.” Aidan instead tries to compel the man by erasing all memory of ever seeing him, but he only succeeds in driving the man to commit suicide.

Meanwhile, they two boys find another ghost, er, “Casper, the handsy ghost,” who hails back from the eighties to instruct Sally in the ways of being a ghost, particularly, moving from place to place. The special effects when they fade in and out are pretty cool. We get to know Sally a bit more in this episode, which is good. She was a lot less annoying as we start to see more of her personality, with some funny one-liners of her own.

Sally to Josh (after he suggests that she could do with a rebound ghost): I don’t need your help, Dry-spell.

She is also able to visit her ex-fiance, only to find that he has been cozying up with her best friend, which of course she is not ok with, despite being dead and as Josh said, “not here.” Just before Tony moves on (through his special door after finding his own closure), he tells Sally that she can physically touch a living person but that they have to be open to it.

The next episode looks cool as Josh finds his own “werewolf” buddy, and it looks like Sally goes on a bit of a jealous rampage as Danny and Bridget start to get more romantic. Overall, still not 100% sure on whether I’m in love with this series or not. Still TBD.

Being Human airs on Syfy at 9pm on Mondays.