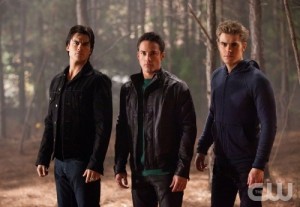 Er, not sure about the title for this week’s Vampire Diaries, but all in all, it was a pretty decent episode. I have to admit that I did forget how how Mason was, especially when the CW showed the shot of him getting killed by Damon. Too bad he had to die, even if he started becoming a little annoying toward the end. Speaking of man-candy, seriously…showing Damon in the shower (a waterfall shower, no less!) and in a towel. It was enough to make my heart stutter.

Damon as usual was quite funny and blase when Stefan asks him whether he was doing ok after Rose, and tells him that he knows that he cared about her.

Damon to Stefan: It means I care, Stefan, it means I’m changing and evolving into a man capable of greatness. You better watch your back. Cause I may just have to go get a hero hairdo of my own and steal your thunder.

How about Caroline and Tyler’s supernatural chemistry when they had their mini-face off? That was cool. Still, Tyler is such a hot-head, and I think that he really got what he deserved letting his wolf-buddies torture Caroline, the only one who stuck by him during the worst days of his life. I love that she basically 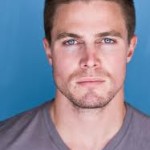 slams the door in his face and tells him that he’s no longer any friend of hers. The torture was a little tough to watch, especially when Brody (Jules’ new hot wolf-pack boyfriend) shoots Caroline in the face and in the body with wooden bullets. But it definitely showed the enmity between the wolves and the vampires.

It was very cool when Luca’s dad comes in to protect Damon and Stefan when they’re surrounded by werewolves, demonstrating Elijah’s “promise to protect Elena’s friends.” Still think that Elijah may be up to no good, but I think it would be awesome if he actually turns out to be one of the good guys. It’s always Damon and Stefan doing the saving…I think it would be interesting if they had help from an “Original.”

Another steamy scene at the end with Damon in a bathtub with his latest conquest. Not sure where the producers are going with this angle of bad-boy versus 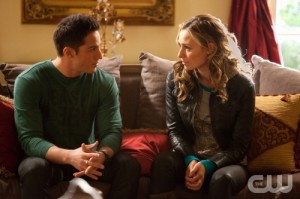 good-boy. I mean, Damon’s trying hard to be good (for Elena), but he  thinks that he is evil, so then he goes and bites innocent people to vindicate his evil self? Not sure if I am liking that too much. I mean, I get it, but it’s a little too existential for me.

Love the twist at the end when John goes to see Katherine in the tomb. Obviously, John still has secrets.

Katherine: I want out of this tomb, John.

John: I’m already on it.

Also left to be seen is Jules’ plans for Tyler. Looks like the moonstone is back in play. And that’s a wrap for this week!