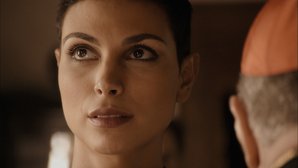 This episode of ABC’s V will no doubt strike a sensitive chord with many people, if only because it involves religion – specifically, Anna takes on the Catholic Church in the Vatican in Rome. Following a cool scene of a V shuttle landing smack dab in the middle of St. Peters’s square, the episode doesn’t hold back with Anna’s confrontation of the Vatican priests and coercing them into denouncing any support of anti-V rhetoric from its priests (initiated of course from our friend, Father Jack, who is Fifth Column). Anna overtly threatens them after their initial vote that they would not condemn the freedoms of their priests, saying that “people will turn to her for answers” and then does a splashy show of blue energy. In the end, the priests re-vote and Anna gets her way.

Meanwhile, a Vistor of Diana’s (Anna’s mother) regime is actually one of the trusted priests in the Vatican. In a neat turn, his study of the ways of the human soul and faith, has made him more human than alien. In another strange twist, he gives Chad Decker a ring marked with a weird symbol before leaving with Anna. Be interesting to see what that does! Although Anna takes him back to her ship, he won’t share any information on what he has discovered about the human soul to her – instead he says that he will only report to his true queen, Diana. Luckily for him, Anna has been keeping Diana locked in a hole for years.

His message to Diana: “The human soul is truly unique. It’s not a curse. But it is in fact the gratest gift our species has ever found. We must not run from it. We must embrace it. And make it part of us. It will sustain our species in the future.”

Anna threatens to skin him to learn everything he knows about the soul. The priest then he sacrifices himself to Diana, who gives him the honorable death for his loyalty. Anna, in a rage at her loss, tells her mother that she has killed her only ally.

Check out a clip of this scene from ABC’s V site:

Last but not least, news in the Fifth Column, Eli Cohn is the very hot dude (Oded Fehr) from Deuce Bigalow and from The Mummy! Love him! Great addition to the cast.