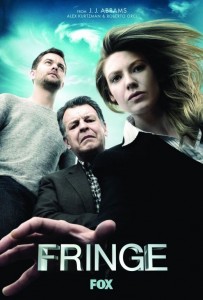 Talk about classic Fringe ending! Freaking awesome! Even though I haven’t been blogging about Fringe over the season, I had to do a post on the very cool season finale, which aired in two parts.

So basically if you’ve been following Fringe, you’d know that Walter brought his son Peter from an alternate dimension to save him from a terminal disease when his own Peter in his own dimension died. His grieving wife was so happy to have her boy back that Walter didn’t return Peter to his own dimension. He stole him. Outside of the typical Fringe events, eventually Peter finds out, and furious with Walter, he returns to his dimension with his real father, who we later learn has sinister plans for him. Peter is the biological trigger to a weapon that “Walternate” (as nicknamed by Walter) will use destroy the other universe.

Walter, Olivia, and three other grown-up “soldier children” go to the alternate universe to find Peter. In th 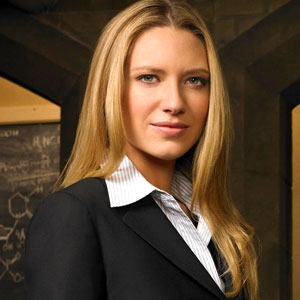 e end, it is Olivia who gets Peter to return with her even though it’s not his own reality – she tells him that she needs him with her…because she loves him. About time, I say!

However, in a shocking twist, Olivia’s alternate self switches places with the real Olivia just as she, Peter, and Walter go back to their own dimension (with William Bell’s help). The episode ends with her going to the typewriter that connects the universes, and she writes, “Infiltration complete.” Alas, Peter still won’t get the love of his life. 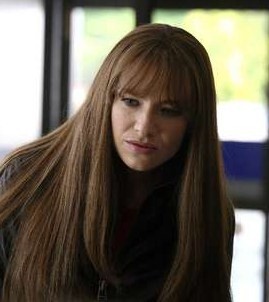 comes face-to-face with herself, and even kicks the crap out of her alter-ego. It was cool to see the other versions of the characters that we are used to from the one dimension. Even Walternate is cool – he is the Secretary of Defense in the alternate universe. It was neat to see him so much more put together than the brilliant but feather-headed Walter that we’ve come to know and love. “The only thing better than a cow is a human! Unless you need milk. Then you really need a cow.” Classic.

Great season finale! Looking forward to next season – with the Olivia-spy in place, the real Olivia in captivity in the alternate universe, Peter in love with Olivia (and fake-Olivia’s response), Walternate still planning the end of the Walter’s dimension, and anything new that Walter comes up with!!! Cannot wait!

3 Comments on Fringe Series Finale: Over There