All in all, definitely not a bad season finale for ABC’s V. They could have definitely offered up more visually for the half-human/half-lizard baby other than the tiny glance of a green snaky tail wrapping around Ryan’s finger. After my last post of the 1980’s plasticine version, I wanted to see more! Lots more. However, that said, I do have to say t 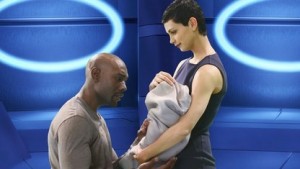 hough that given the whole theme of human empathy throughout the final episode that it was a nice touch that the baby recognized and loved its father. That was sweet (and cute). Awww. Speaking of Ryan, I think he may turn back to Anna’s bliss unless the baby’s connection allows him to resist her. That would be neat.

Got another glimpse of the alien teeth when the soldier was feeding and even though it was cool to see that again, I felt like it was used material. I wanted to see something new other than angler-type teeth and weird slitted eyes for the Vs. In some way, it also lessened that look for Anna as the queen, if that makes sense. It would have been way cooler if the soldier’s teeth had been slightly different. But I guess they are her spawn.

Still can’t stand Kyle Hobbs or Chad Decker, and was glad to see that Chad got set straight after Joshua told him to go check out the human experiments. Too bad that they had to reuse the other initially cool scene of the torture needle table. Wish that they had showed some other funky human experimentation device. Chad was totally Anna’s little dog as they called him, and so self-righteous that I wanted to punch him in the face, especially when he betrayed the gang. It was so awesome when Joshua told him that Anna put an aneurysm in his head, she didn’t take one out. Classic Anna. 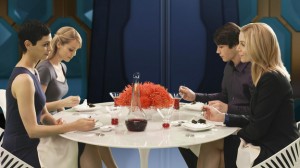 I completely LOVED Lisa’s role in this episode and how she just brings it. Love how Joshua called her “my queen” after she told him that he was very brave. That was another awesome moment. Speaking of Joshua, bummed that his old version died, but am interested to see what they’ve reincarnated/healed and whether he will remember anything of his past empathy and Fifth Column ties. Erica was super strong in this episode too! It was great to see her stand up (although most of it was tongue in cheek) to Anna. And when she walked into the egg room (barf!) and dropped the blue energy grenade (hey, that was new!), that was incredible!

Anna’s all too human response at the end was awesome when she finds the destroyed eggs. Loved the little sm 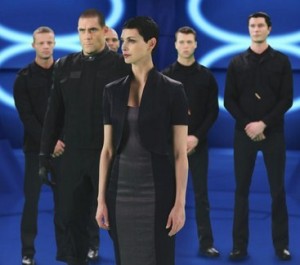 And I guess the red sky at the end means that Anna has declared war officially – maybe it’s the sign for the Vs to move in. Either way, it was definitely a cool and ominous way to end the episode.

Can’t wait to see if they renew V for a second season. Sci-fi has always found it tough to remain on network television so we will see if V returns in the Fall, even at the very least a mini-series like the original. Need the closure!!