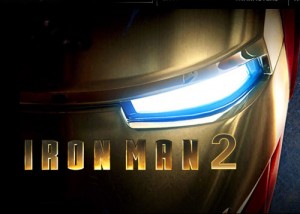 Iron Man 2 is a worthy sequel to Iron Man with tons of action, gadgetry, cool special effects, and classic Tony Stark one-liners. Sitting at 75% on the Rotten Tomatoes Tomatometer, Iron Man 2 was worth the wait (and hype). As Tony Stark/Iron Man, Robert Downey Jr. is charismatic, witty, and charming. You can’t help but like him, as he continues on in the same vein of Iron Man one with flippant brilliant billionaire arrogance – “I have successfully privatized world peace!“

Add in a couple cool new characters – Mickey Rourke (Sin City and The Wrestler) as Ivan Vanko, the villain, Scarlett Johansson (He’s Just Not That Into You and The Nanny Diaries) as his sexy assistant slash kick-as 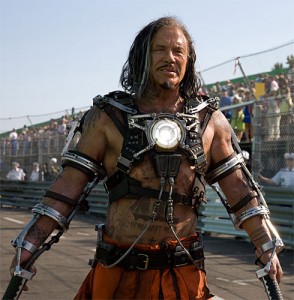 s agent, Natalie Rushman, Sam Rockwell (Confessions of a Dangerous Mind) as the competitive but flaky weapons distributor, Justin Hammer – and the momentum just takes off. Iron Man 2 is well-acted, action-filled, unpretentious, and pure feel-good comic-book fun that doesn’t take itself (or previous performance) too seriously.

Brief synopsis. Tony Stark is Iron Man. At a senate hearing where the US government is trying to get its hands on the Iron Man suit as a weapon, in classic fashion, Tony responds, “To turn over the Iron Man suit would be to turn over myself, which is tantamount to indentured servitude. Or prostitution, depending on what state you’re in.” Classic! He then shows videos of different countries, including Justin Hammer, trying to imitate the Iron Man suit to dismal failure, claiming that the technology for anyone else to mimic Iron Man is years away. The villain in this installment is Ivan Vanko or Whiplash, a physicist whose father was a co-designer of the arc reactor. He wants to destroy Tony Stark for destroying his family and builds an energy suit to show that the invincible Iron Man can be hurt and that the technology isn’t years away. 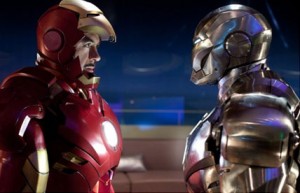 “If you can make God bleed, then people will cease to believe in him … All I have to do is sit here and watch, as the world will consume you.” Sure enough, smelling blood in the water, the smarmy Justin Hammer coerces Ivan Vanko to help him build and automate the next generation of advanced tech robotic soldiers.

In the middle of all of this, Tony learns that the technology keeping him alive is slowly poisoning him. Despite his affirmation to Nick Fury of being an independent gunslinger, “I already told you I don’t want to join your super secret boy band,” they help him to briefly counteract the effects of the toxin so that he can build a new less corrosive source of energy for his heart.

Meanwhile, unfortunately (and predictably), Ivan Vanko has his own end game, and remotely controls all of the droids as well as a second Iron Man suit operated by Rhodie (played in this sequel by Don Cheadle, from Traitor), to kill Iron Man. In a very cool end scene with lots of sick flying maneuvers and pyrotechnics, Iron 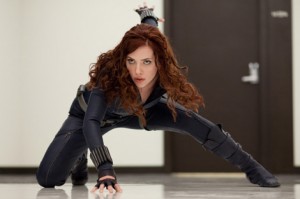 Man and Rhodie (who regains manual control of his suit with Natalie’s help) fight off all the droids and defeat Whiplash.

End scene = Tony Stark kisses Pepper Potts after he saves her from the final explosion. No fun and games with the baddass, latex-clad ScarJo (yep, see insert, she’s smoking hot), instead he gives his heart openly to Pepper. Awww.

Overall, Iron Man 2 was great start to finish, and full of humorous banter, great action sequences, and solid acting with great cast chemistry. All of the pieces and characters came together well, with of course a future set up for other installments in the Iron Man franchise. There’s nothing new here – hero is idolized, villain plots to kill hero, best friend betrays hero by aligning with his enemies, hero overcomes self-pity and rises 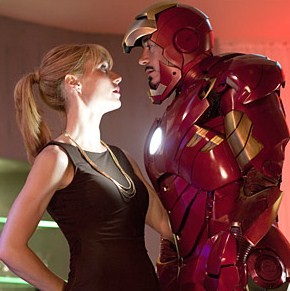 to defeat villain, hero makes up with best friend, hero gets girl.  The technology and robotics are similar to the original Iron Man, the characters more or less have the same light-hearted, witty relationships (even Vanko who wants his “burd” is hilarious), but the banter and overall humor together with the adrenaline-filled fight/actions scenes fuel this sequel. I don’t think it was a filler for a planned upcoming Avengers movie, in fact, I think Iron Man 2 stands alone quite well. I enjoyed it thoroughly.

I would rate Iron Man 2 four out of five stars for good entertainment value and great humor. Fans of Iron Man (the movie) will enjoy it. Fans of the comic book series may be looking for something a bit more fleshed-out.

Either way, I’ll leave you with another Tony Stark classic. “If it’s one thing I’ve proven, it’s that you can count on me to pleasure myself.”