The Vampire Diaries season finale was awesome! Love, love, love the ending with the twist! Guess who’s back!? I’ll give you a hint – it’s not Slim Shady.

I thought it was totally weird that Elena would kiss Damon especially after she was so sincere with Stefan, but I sort of expected it given the little covert eye looks and flirtation going on between them the last few episodes. Damon is hard to resist. Even earlier on this ep 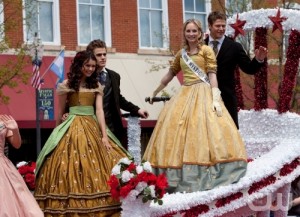 isode, she asks him to stop his flirty little comments and “that eye thing” that he does. Damon says “what eye thing” and then does it! Naughty, naughty. I am definitely feeling the chemistry between them, and not sure that I like it so much because it’s just wrong (she’s with his brother) or because Damon is so sexy. My guess it’s the latter.

But I digress. Back to Elena/Katherine. I totally started feeling something wasn’t right with “Elena” when she was standing behind the fridge so quietly with some definite vampire-style stealth. But I actually didn’t guess it until she eyed John’s ring. And then of course I almost jumped out of my skin as that knife came down slicing off his fingers and offending ring. Wow. She is vamp fierce. Love the “hello John, goodbye John.” Way to bring Katherine back when all season I’ve been wondering when we’d see her although I still want to know what her end-game is now that she’s killed John Gilbert (or maybe he isn’t dead after all…).

I watched the last five minutes a second time after I knew for sure it was Katherine, and the nuances were subtle 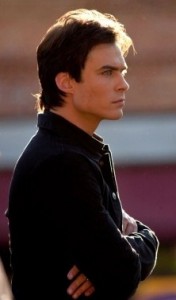 . She was Elena, but not quite Elena. She looked different, colder and older. Even in her conversation with Damon, she was strangely curious, especially after he kissed her on the cheek or when he was explaining why he was trying to do the right thing. Because she wasn’t Elena. LOVE how Damon touched his lips after Katherine went inside (invited in no less by Jenna! – “it’s late, you should probably come inside“). He frowns almost like if it was too familiar. Very cool. I really hope he puts two and two together a bit – I’d expect that from Damon, he’s no sucker (um, you know what I mean).

Jeremy was good in this episode but of course what happens with him almost gets eclipsed by all of the action with Katherine and Tyler. I cannot believe that he has taken Anna’s blood and a bunch of pills. On the one hand, it’s such a cop-out, especially after Damon’s heartfelt conversation with him about life not being that easy even as a vampire. But on the other, I can understand why he would want to do it so that he wouldn’t have to feel anything. Part of me wants him to turn, and the other doesn’t. I think it would be way cooler if he became something else, like some kind of half-vampire, half-human.

Bummed that they killed off Anna – she was a very dynamic and interesting character I thought. But I can understand why – her whole reason for living was her mother, so when Pearl got killed, it makes sense that she had to die. Now that I’m writing this, I think that Katherine came back to punish John for what he did to Pearl and Anna – after all, they were originals, part of the 1864 Katherine crew. There’s definitely something going on that we don’t know yet, especially with respect to what is driving Katherine – there are just too many interpretations from everyone else. I want to know what she wants. 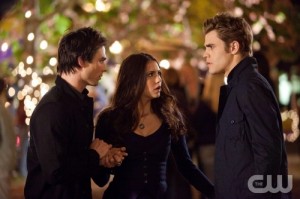 Also loved Bonnie in this episode and how totally badass she is – “you saw what I was able to do today…I know who I am now” and the way she tells Stefan that Damon has to shape up or she’ll take them both out. “I’ll take him down even if I have to take you with him.” Definitely cool!

Great season finale! I was a bit sad that we didn’t see more of Tyler or his dad as werewolves except for the very cool but short snippet of his wolf-eye, but I guess they are saving him for next season. It was a little funny that the device also worked on them in addition to the vamps – the mayor definitely was not expecting that! Sad that he’s out of the picture because I liked the rough dynamic between him and Tyler, but I guess Tyler will now need to work it all out on his own.

And now for a very long hiatus until fall…  True Blood will have to keep me company until then! I just have to survive a vampire-free month until June 13, 2010! Ack!