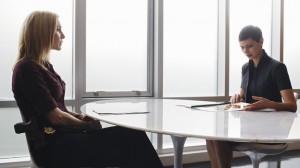 Hmmm…maybe they meant Friction instead of Fruition on ABC’s V because I wanted to throw my television against a wall. Boy, is Anna the master manipulator or what? From working Chad Decker to a T and getting him to push support for the Vs to stay, to physically abusing her own daughter for sympathy and gaining resources to unearth the Fifth Column. She is definitely a piece of work. I do have to say that it was awesome to see the little smile on Joshua’s face after he sees that Lisa can resist Anna’s bliss. That was cool. Lisa has definitely grown on me – hoping that she will become Fifth Column. Love the twist with the algae that could be deadly to the Vs.

On the flip side, Chad Decker still annoyed the pants off me – he’s so needy, it made me feel like barfing. I am hoping that he can make some sort of turnaround in the finale and prove to have a little backbone. He’s like a little terrier lapping at Anna’s heels. Come on already!

I also cannot stand Kyle Hobbs. Seriously, negotiating with Marcus from the Vs? That’s just stupid. After the other three put so much on the line for him and he’s going out on his own. What struck me the most about him in this episode was his conversation with Ryan about having no feeling. It’s a neat reversal because some of the Vs are becoming more human-like because of their connection to human emotion, while Kyle has trained himself to be so emotionless that he is more V-like. He has no empathy. Very interesting take. I loved that despite what Kyle told Marcus, he still refused Anna’s bliss. 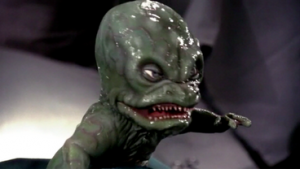 Season Finale airs next week on Tuesday 18, 2010 at 10pm EST on ABC. Apart from Hobbs’ dirty dealings with the Vs and Lisa’s growing empathy, looks like a little lizard baby is on the horizon! Don’t forget this cute little guy from the original V series!