OMG. Two words – clawshot hell. This level was all about using the single and then the double clawshot to get around the various floating rooms in the sky.

First word of advice, equip the iron boots whenever you feel the wind start to pick up walking between rooms or you’ll get blown right off the walkways, which means instant death.

Second word of advice, when clawshooting between the peahats, use Z-target to lock on, then press B to jump between them which will be very useful when you have to use spiderman-like instincts to get past the boss’s fire-breath. Try not to press A instead of B otherwise you’ll let go and fall into space or enemies – had to learn that lesson the hard way a bunch of times even with the boss. Z-target doesn’t work with the vines. 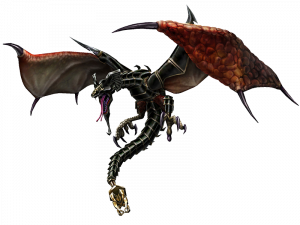 Final piece of advice, you don’t have to beat the two Aerolfos – the guys with the clawshot shields that you have to draw down to you before they knock you off your feet (which I thought were way worse than the bosses for some reason) just before the big boss. Just clawshot your way up out of their reach, about the second or third fan, and get to the boss.

Argorok wasn’t too bad. Once you Z-target his tail a couple times, he drops his armor, then the peahats come into play, and it’s clawshot monkey-swing time. Although like I said, I did press A stupidly at the wrong moment and busted out my hearts falling to the ground. Once Argorok stops blowing fire, target him manually (the blue gem on his back) and clawshot to him, whacking him silly. Couple times of this and you’ll be done. Careful though, the last time, he reverses direction on the fire-breath, so you’ll need to rotate and Z-target back along the peahats as quickly as possible until he stops.

4 Comments on Zelda: Twilight Princess – City in the Sky

1Pingbacks & Trackbacks on Zelda: Twilight Princess – City in the Sky