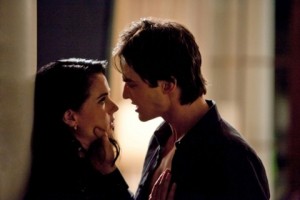 Damon is on fire! I love when he took charge vampire-style administering a beat-down on Isobel when she tried to get too fresh. Way to show her who was boss, although it didn’t seem to do much to deter her. Isobel is definitely irritating, even with showing her sensitive side to Alaric in the end. Plus I can’t stop thinking about Mia Kirshner in Not Another Teen Movie where she was adamantly wishing that someone would take a dump on her chest. Not a great image for a bad-ass vampire.

Glad to see that Damon still has his famous one-liners.

Cool twist that the invention is part of a weapon to kill vampires, and that Katherine wants it. Although I am not quite sure that I get that. Why would Katherine want to kill the tomb vampires? And also, wouldn’t she be pissed off that Isobel added Stefan and Damon to the kill list? I mean, she did love them both supposedly.

I liked that Bonnie made up with Elena (albeit briefly), and that she was back in the mix to help save Jeremy. She has 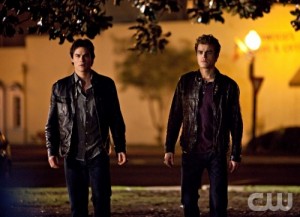 obviously been working on her skills since her grams died, but I knew the way she looked at Damon after she did the spell on the weapon that she was lying. After all, she did tell him not to trust her and she hates both Stefan and Damon.

Anyway, interesting bit at the end where we find out that John is really Elena’s father. I do want to know why Isobel made the choice to become a vampire in the first place, especially since she confessed to Alaric that it was her biggest regret. Something to do with Elena? And how did she become entangled with Katherine? What’s going to happen with this weapon? Will a float explode???

Season Finale next week! Founder’s Day airs on Thursday on the CW at 8pm.