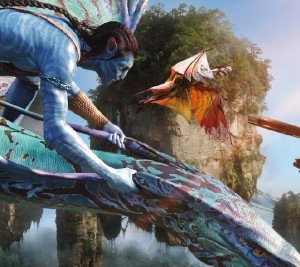 A visitor to my blog sent me an email that the name of the neural connection between the Na’vi and their steeds (Direhorses or Mountain Banshees or in the case of Toruk Makto, the Leonopteryx) is called Tsahaylu so I thought I’d post an update in case anyone else wanted to know. In Na’vi language, it means the bond. The Na’vi also use the bond to become one with Ewya and hear the voices of their ancestor’s souls by joining with the Sacred Tree of Souls.

It’s pretty neat that James Cameron’s concept of the “avatar” trends throughout this film. I mentioned in my initial review that I felt like I was experiencing Pandora through the film as my avatar. In this case, when the Na’vi bond with another creature like the Direhorse or the Banshee, they guide and control its thoughts with their own via tsahaylu. So do they then become avatars of the Na’vi? It’s a mind-boggling concept. I think I actually get a bit dizzy if I think about it too much, so I may just stop myself now while I’m ahead. Do post if you’ve noticed similar though.