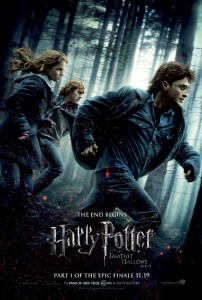 Having nixed the 3am showing in IMAX of Harry Potter and the Deathly Hallows, Part I, on Friday morning, I woke up very early on a Saturday morning to make it to the 9:30am show. I have been a Harry Potter fan from the first book and from the very first movie, so of course I had to see this film within the first few days of release. Overall, it was good, and very true to the book, but I think that most of this installment in the series is a build-up for Part II of the Deathly Hallows. As a result I did find that it dragged in places, especially during scenes when they were traveling (i.e., the incessant camping) or working out next steps, and while the action scenes were pretty awesome, I found myself waiting for things to happen.

That said, while many people may think that it was a money-making gimmick to split the last book into two movies (and it very well may be), there is so much information in this book which was translated quite accurately in Part I, including the retrieval of the next horcrux, their journey to destroy it, and the revelation of the story of the Deathly Hallows (which is integral to the culmination of this epic story), that Part I does it tremendous justice.

In summary, the film opens with much of the doom and gloom following the ending of the Half-Blood Prince. Voldemort 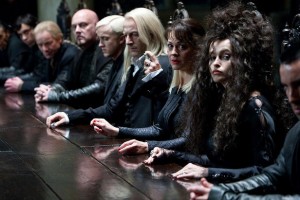 and his Death Eaters have taken over, and Hogwarts has been shut down. The Order of the Phoenix barely manages to get Harry to safety in the Weasley household in the beginning of the film, their every movement tracked by Voldemort’s people. Despite all the danger, Bill and Fleur’s wedding still goes on, until they are all attacked by a fleet of Death Eaters after the announcement that the Ministry of Magic has fallen to Voldemort. Harry, Ron, and Hermione take off on their own together to find and destroy the remaining horcruxes. They find out that the real locket (the one switched by Regulus, Sirius’ brother) is owned by none other than Dolores Umbridge. After an elaborate and exciting scheme to infiltrate the Ministry using polyjuice potion, the three friends manage to steal back the locket and are now 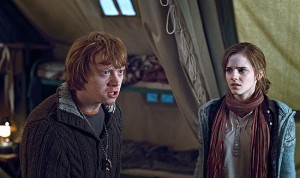 on the run. The locket, as evil as it is, causes them, particularly Ron to have severe hallucinations and evil thoughts. Ron and Harry have a fight over Hermione, and Ron leaves. Harry and Hermione tough it out alone, getting to Godric’s Hollow in search of more answers where they are attacked by Voldemort’s snake, Nagini, barely escaping with their lives. Ever on the run, in the wilderness, Harry follows the patronus of a doe to discover the sword of Gryffindor at the bottom of a lake and is helped by Ron of all people to destroy the locket horcrux, despite a pretty steamy scene (with uber-cool effects) of the locket torturing Ron with images of Harry and Hermione wrapped in a passionate embrace. Moving on and tracking a strange symbol that keeps appearing along their journey, the trio goes to see Luna’s father, who explains that the symbol represents the story of the Deathly Hallows which Hermione relates as the story of three brothers who cheat death out of three gifts – the elder wand, the resurrection stone, and the cloak of invisibility. At the last minute they are almost captured by Death Eaters, and apparate only to fall into the hands of snatchers who bring them to the home of the Malfoys and Bellatrix Lestrange. There, Hermione is tortured, but they manage to escape with the help of the “free” elf, Dobby, who unfortunately becomes wounded during their daring escape, and dies. Harry buries his friend. Meanwhile, Voldemort breaks into the tomb of Dumbledore and finally has the Elder Wand in his grasp. End of Part I. 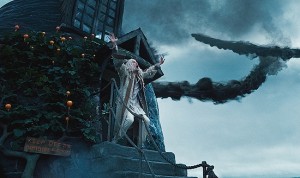 In retrospect, I enjoyed the film particularly because it was so faithful to the book and to the story. A lot of these pieces are critical to the final stand-off between good and evil, between Harry and Voldemort, and much of the movie is very dark because it does have to portray evil taking over good. Therefore as a result, there’s a lot of death – Hedwig, Mad-Eye Moody and Dobby to name a few. It does feel at times, as I mentioned, that it’s dragging on, but I expect that that is to show that it’s not just a quick “here-comes-the-hero-and-all-is-well” scenario. They have to work together to triumph over the growing evil. Unlike previous films, where there is a build-up and crescendo, in this film, instead of one big bang, there are a bunch of little action nail-biting sequences. I have mixed feelings about this because I really wanted the “big bang,” but a part of me was happy that it remained so tightly in-line with the book and I know the big bang will come in Part II. I wasn’t disappointed with any of the special effects, especially the black swirling mist of the Death Eaters or some of the cooler spell effects. 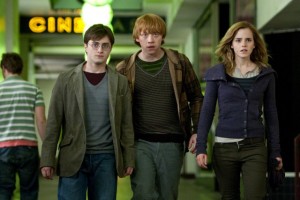 This film is about the relationship between the three main characters, and their first true test of friendship and love in the face of the worst possible evils. It is a lot more mature than the other films which were almost “protected” by a childlike environment within the walls of Hogwarts. Now they are out in the world with only themselves and their friendship to rely on. There’s no Dumbledore and no Hogwarts spell to keep out the baddies and the Dementors. It’s undoubtedly dark but it’s also strong and real. While previous films have all been about plot and being chock full of excitement, this one is all about the development and the journey of its characters. As a Part I, it definitely fulfills expectations….but on the flip side, it sets a lot of new ones for Part II. Big ones. 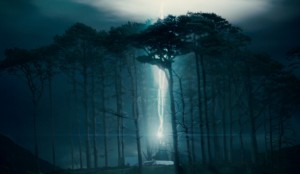 Overall, I would rate Harry Potter and the Deathly Hallows, Part I, four and a half out of five stars. It did what it was supposed to do – set the scene of dark despair within a world rules by Voldemort, and build an emotional connection with the main characters for Part II. I couldn’t quite rate it five stars because of the pacing, but at the same time, I understand that the pacing was meant intentionally. Still, that doesn’t mean that I have to like it, even though I get it. Damn those producers!

Like I said, big shoes to fill come Summer 2011 for Part II, as I expect that the pacing is going to be a whole lot different than this one. For fans of the series, this is a must-see. For others, if you want closure, you’re going to have to suck it up and go see it even with the pace issues and no big woo-hoo moment at the end. It’s Part I of an epic finale. Don’t miss it.