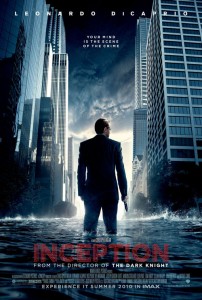 Prepare to get completely mind-effed. I was, and am still recovering.

Rated at 84% on the tomatometer at Rotten Tomatoes, Inception was an amazing film. Not only was it a fantastic visual experience, the plot is so intricate with so many layers, that you would need to see this movie more than once to even try to get it. Based on mazes as the basis for the architectural design of the dream world, Inception certainly seems to be just one giant maze that your mind constantly swings around – like the unending staircase loop. Paradox.

Similar to the Matrix in terms of its question of reality, Inception brings a new concept to the fore – entering one’s dreams to steal secrets or learn one’s thoughts. That is known as extraction. Inception on the other hand is the planting of an idea of external origin into the dreamer’s subconscious so that they come to accept and believe the idea as their 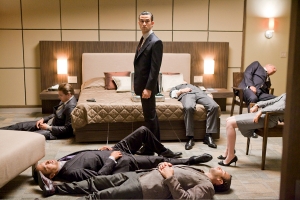 own. Sounds simple right? In fact, it is far from simple as the delicacy required to not have the dreamer’s subconscious automatically reject a foreign thought is almost impossible.

In Inception, Leonardo DiCaprio plays Cobb, an extraction artist. A fugitive from the US, he is engaged by a third party, Saito, who asks him to perform inception with the heir of a billionaire and plant an idea to break-up his father’s empire to avoid a global corporate monopoly. To even achieve the near-impossible inception, Cobb and

his team need to go four-layers deep into the dream-state, dreams within dreams, which puts them dangerously close to being in limbo (a state where you cannot return to reality). In each of the layers, they face different dangers, not just the dreamer’s subconscious protectors, but also Cobb’s own demons (his dead wife that guilt has kept alive in his mind) that attempt to sabotage them. Ultimately, they succeed in planting the idea, and Saito wipes Cobb’s record allowing him to get back to his children. In true movie fashion (*groan*), in the last few minutes, you are left haunted with whether Cobb’s reunion is actually a dream or reality, and whether they even succeeded at all!!!!

All I can say at this point is that the collective groan of the entire movie audience summed it up. MIND-EFFED.

Great cinematography – as good as anything your mind can dream up – that keeps your heart pumping while your mind is racing uncontrollably trying to keep up. Let me put it this way. If you’re looking for escapism, look elsewhere. This film will make you think, make your brain work trying to connect the different pieces…it just might make you insane trying to work out all the variables or

invariables as the case may be. It’s so open to interpretation that you will think one thing one minute and then something completely different the next. Is it possible? Is it improbable? Is it doable? Is it one big mind-game? Who knows.

Amazing film. I would rate Inception 4 out of 5 stars. But like I said…that could change on a dime. Definitely a “go see it.” And pay attention because if you miss one second, it could change everything.