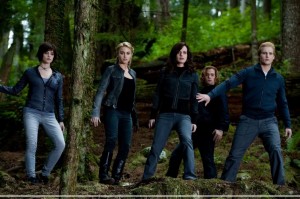 I finally managed to get in to see Eclipse over the weekend. I can honestly say that from Twilight to New Moon to Eclipse, the movies have definitely improved. But of course, boatloads of money will do that for you. I’m still not a huge fan of Robert Pattinson *gasp* but I’m very impressed with Taylor Lautner in this go-around. I found him to be very interesting (and hot) as Jacob, and am now wavering in my self-professed “vamp-girl-for-life” persuasion.

Rated at 54% on the tomatometer at Rotten Tomatoes, the film did have some great moments, like the fight scene between the vampires and the wolves which was exciting and fast-paced. I’m not sure I’m a fan of the diamond bodies – something about it just doesn’t resonate with me but that could be because I’m a crumble-to-ash-when-staked kind of girl. Old school. Nonetheless, in the new school, it was still pretty cool.

The core of the novels, I didn’t really enjoy the love scenes between Bella and E

dward as much as I did when I’d read the books. In the film, I found them long and drawn-out. They were tedious and sappy, and I wanted to get to the action sequences. Something about Edward in this movie also felt a lot older to me – he didn’t seem as young as he did in the other two movies. Maybe that’s what made the love scenes seem awkward. Not entirely sure. I did like the interaction between Bella and Jacob – they were far more interesting. Plus you can’t help rooting for Jacob – the little underdog…er…wolf.

I also really enjoyed the back stories of each of the Cullens, and I especially liked Jasper’s story. I thought he was really great in this film – loved his humor and found that he reminded me of Louis from

Interview with a Vampire at times (when he was conducting the training of the vampires and werewolves to fight the newborns), which was very cool.

Overall, I’d say it was a decent representation of the novel, and a film that most Twihards will enjoy. Me, I liked all the action scenes, Jacob’s constantly shirtless tanned body, and the nice one-li 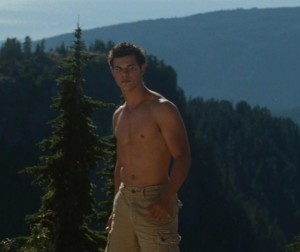 Edward: Doesn’t he own a shirt?

Not to mention the first kiss between Jacob and Bella which was so funny.

Jacob: I kissed Bella. And she broke her hand. Punching my face. 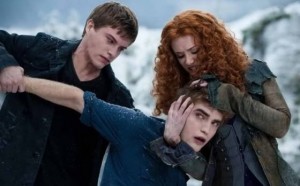 The film had both good and bad moments, but overall I enjoyed it. I thought that Xavier Samuel who played Riley also did a good job of being Victoria’s little minion. But in the end, he dies, poor thing. Dakota Fanning as Jane, in the little we did see of her, does a great job combining the little girl looks with stone cold killer. Got chills from that one…nice. Not sure who the other two Volturi were but didn’t care too much on that front. Jane and Felix were enough for me.

Overall I would rate Eclipse, the movie, 4 out of 5 stars. It was fun and stayed true to the book which fans will love. Couple that with Edward’s broodiness and cool vampire hair, and Jacob’s chiseled abs, and well, you’ve got box-office millions. Enjoy!

4 Comments on The Twilight Saga: Eclipse