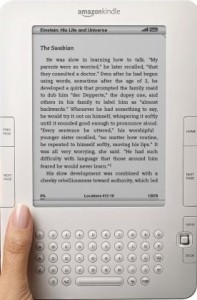 In the NY Times today, there was another interesting article, “On Kindle’s List, the Best Sellers Don’t Necessarily Need to Sell.” This time it was about best-selling books on the Kindle, only the kicker was that these books are free. Yes, you read that right – they are free. According to the article, “more than half of the best-selling e-books for the Kindle are available at no charge.”

The thinking behind this stems from more unknown authors who want to create some buzz about their work – offer the e-book Kindle version for free a month before hard-copy release or perhaps create a fan-base for secondary title releases. The goal is to get readers to try out new authors, and get them hooked for future publications (that aren’t free).

Although the CEO of Hachette disagrees – “it is illogical to give away books for free.” Then again, his clients include James Patterson and Stephenie Meyer who only have a to sneeze into a book and people will buy it. Not so much for other less familiar writers who need to drum up some interest against such incredible competition. Trust me, I’m one of them.

Let’s be realistic though. Not every new author wants to give away free books. After all, it’s their blood, sweat and tears. But if something like this in a promotional vein means generating buzz…then it starts to develop a little bit of a silver lining. Word-of-mouth these days, especially with the internet and the flux of social media like Facebook and Twitter, has become viral. So why not leverage the visibility? I would.

On the personal front, one of the literary agents I had the pleasure of meeting was Richard Curtis, founder of E-Reads. Well-known and highly respected in the fields of literary agenting and publishing, Mr. Curtis had it down pat. The world of books is evolving and he’s right there with it.

According to the NY Times article, e-books represent about 5% of the book market. And that is a growing number. Just ask Amazon who refuses to release actual sales figures for Kindle sales (theory is they’re going for market share and not for profit). Either way, it’s an upticking trend. Take a look at an article about their projected earnings from MarketWatch for the fourth quarter – not too shabby!

The trick is to stay ahead of the curve. With handheld gadgets like the iPhone or iPod Touch or the PSP becoming more popular, this is where the curve is heading. I’d predict that more and more people, myself included, will capitulate at some point and pick up a Kindle. I haven’t yet – I’ve always been a big fan of actually touching the pages of a book and reading actual print. But I’m on a PC every single day so maybe in the not-too-distant future, I’ll be a convert.

See this article in the Larchmont Loop.