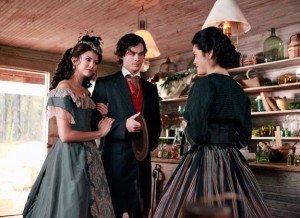 Things are starting to heat up on the Vampire Diaries. I loved the flashback scenes. I thought it was really neat to get some perspective on Katherine’s character especially since she and Elena look so much alike. It’s cool (and scary awesome) to see that “vamp” side. Strangely enough, it makes me like Elena more knowing that it’s the same actress, only because Elena sometimes feels very bland to me.

I felt really sad for Damon when he was betrayed by Elena. He expected it from Stefan because Stefan has betrayed him in the past (the biggest one of course was with Katherine), but he’d started to trust Elena. That was sad. I mean I love Stefan and Elena as a couple but I just feel so sorry for Damon….all the poor guy wants is to get his love back!

Next week’s episode looks like it’s going to be another nail-biter with Elena’s life hanging in the balance, now that Ana has kidnapped her. Bonnie’s also been kidnapped by her “date,” the other vampire working with Ana. I guess they need her for the spell on the tomb. I would really like to see Bonnie amp it up in the next episode and put some hurt on him. She’s a witch for crying out loud – she needs to come into a little more power than flaming up a few candles!