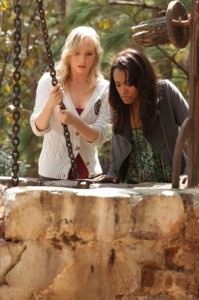 Katherine is really ramping up the evil in this episode, isn’t she? I thought the opening of this episode was pretty cool with the juxtaposition of the two love scenes between Katherine and Mason, and Elena and Stefan. I find it very interesting when you see one actress playing two different opposing characters so well, particularly because Elena is so predictable most of the time while Katherine is exactly the opposite.

Katherine: Do you honestly believe I don’t have a plan B, and if that fails a plans C, then a plan D. You know how the alphabet works, don’t you?

In summary, this episode is about figuring out what Katherine is up to and why she wants the moonstone. To this end, Damon and Stefan convince Bonnie to help them despite her hatred and mistrust of all vampires. She does the brain aneurysm trick and debilitates Mason, and also uses her power to locate where he’s hidden the moonstone. Stefan goes in search of it only to find himself chest-deep in vervaine. Guess Mason didn’t truly trust Katherine after all. Speaking of the wolf-man, meanwhile Damon takes Mason back to their house where Damon proceeds to torture him with a hot poker and wolf’s bane among other things to get him to reveal Katherine’s end-game. 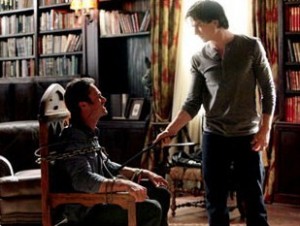 Damon: You know I look at you and I see myself, a less dashing and less intelligent version.

Mason: I love her.

Damon: Oh I know. Ive been where you are. But Katherine will only rip your heart out. Let me do it for her.

And then Damon does the unexpected and rips Mason’s heart clear out from his chest. Boy, was I not expecting that! I mean I know that Damon has his bad side, but I honestly thought that he was just bluffing. Silly me thinking that Damon was now a “nice” vampire.

Notwithstanding my distraught shock at Mason’s unexpected demise, Caroline is continuing to be a pleasant surprise. I keep wondering when she’s going to revert to her spoiled and annoying pre-vampire personality, but instead she just keeps amping it up. I am loving her strong character! Her mom says it the best, “It’s just that you’ve become this person…this strong this confident person”

I love that Caroline didn’t give in even when a good relationship with her mother was at stake. I think the old Caroline would have caved, especially when her mother told her that she could trust her and that she would never tell anyone Caroline’s secret. That was another surprise for me in this episode. I did not expect Caroline to be so selfless and do what she did, risking a chance at happiness with her own mother to protect Damon and Stefan.

Caroline: I know I  can trust you. But you’re never going to trust them. Then in tears, she compels her mother. You had the flu. I made you soup. […] And your selfish little daughter who loves you no matter what, went right back to ignoring you. And all is right in the world.

I am also enjoying the fact that Jeremy is growing more confidence, especially when he stands up to big sis as well as 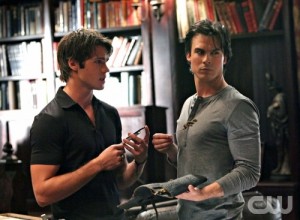 big bad Damon. I want to see more of him in upcoming episodes. Love his ominous words to Elena about Katherine (after Katherine compels Jenna to stab herself to prove to Elena that she’s always one step ahead of them), “she’s going to pay Elena. I don’t know how but she’s going to pay.” By the way, that was unexpected moment number 3 in this episode. Didn’t expect that Katherine would be able to compel Jenna over the phone, unless she set it up from way before as collateral damage. Very interesting.

Speaking of Katherine’s threats which brings me to semi-unexpected moment number 4…the break-up, for real this time. For the first time in The Vampire Diaries, I was moved emotionally by a scene, one involving Stefan no less. I don’t know what it is about seeing any man cry, but boy, I got a little choked up after watching Stefan’s heartrending reaction when Elena tells him it’s over.

Stefan: I know what you’re going to say.

Elena: Then let me say it. I’ve been so selfish because I love you so much and I know how much you love me…but it’s over. Stefan, it has to be. It has to be.

Every emotion was written all over his face…and at the end, he was completely broken. Honestly, I wouldn’t be surprised if Stefan completely loses it from this point out now that he no longer has Elena in his life. I’m guessing that he will make it his driving objective to hunt Katherine down.

Speaking of Ms. Fangy-tude herself, now that she needs another werewolf for her evil plans, it’s exciting that s 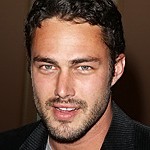 he compels Matt to go after Tyler until Tyler kills him, triggering the werewolf curse.

And that, my friends, is that for my recap of Plan B. RIP Mason Lockwood. I, for one, will miss your hairy yellow-eyed hotness.

The Vampire Diaries airs on Thursdays at 8pm on the CW.

3 Comments on The Vampire Diaries: Plan B