So I’m not dead, and I’m not about to go try to turn myself into a zombie, if that’s what you’re thinking. Zombies are gross … picking apart guts and gore from the living, all half-rotted and disgusting. I’d become a vampire first if I had to live off humans. Here’s the thing–I hate zombies. I think they are the furthest thing from romantic and sexy, and well, I like a little sexy in my paranormal friends. Plus, I got scary-gross nightmares from Night of The Living Dead when I was a kid.  Those things leave scars. I couldn’t even watch Shaun of the Dead without blocking my eyes. 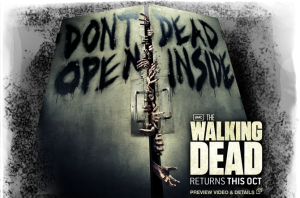 That said, I recently started watching The Walking Dead, and I’m totally hooked. *Wait, what?* you ask. I kid you not. I fell hard for this series. Hard. Put it this way – I watched two full seasons of it on Netflix in a week. Obsesssive? Just a tad. Anyway, this blog post is not to blog about my addiction for this series, but I noticed something in myself that I thought was worth investigating.

The Walking Dead is such a compelling show that as a viewer, you can really start identifying with its characters. In my case, so much so that in one of the last episodes, I was yelling at the television that one of the main guys deserved to be part of an all-you-can-eat zombie buffet.

The episode in question was Skip and Dale (Season 2, Episode 11) … for you Walking-Deaders, it’s the one where Dale gets cleaved open at the end. Now, on the whole, I don’t mind Dale as a character. In fact, I kind of found him old-dude endearing (although his “concern” for Andrea seemed a bit too creepy for my taste–I  kept waiting for him to pounce on her with a full-on liplock). But creepy old man aside, he really started to get on my nerves when he goes from character to character in this episode to plead for a prisoner’s life … a prisoner who can endanger the whole group if he gets loose, mind you. Dale’s position is that if they execute the prisoner in cold blood, they would lose their humanity and it would cross a line. In any normal situation, I’m a pretty compassionate person and I’m all about humanity. However during the whole episode, I was screaming for Dale to shut up … that one sacrifice is good for the lives of many. And I wanted him to be zombie-bait.

Then … he was. Dale got killed. Badly … in total gruesome Walking Dead fashion.

And I felt TERRIBLE. Not that I had caused an actor’s fake death on a television show, but that what I had wanted to happen had happened … a man died. And that’s the interesting thing I wanted to talk about. I found myself becoming so attuned to these zombie survivors and this whole cast of people battling for their lives every single day–thinking like them and behaving like them–that I was losing any of my natural empathy. It was a total existentialist moment. OUT. OF. BODY. I mean, I was making choices that I never thought I would ever make in a million years.

Is this how I would react if I were stuck in a post apocalyptic-type situation? I always thought I’d be the strong but compassionate one, but after watching that episode of The Walking Dead, now I’m not so sure. It kind of got me to thinking. Exactly what kind of person would I be when faced with that kind of choice in a specific life and death situation where others are at risk? In a post-apocalyptic scenario, is a man’s life worth less?

What kind of person would you be? Would you defend the one against the many even if the risk is huge? Or would you sacrifice the one for the many? Or would you say nothing and let the group decide your vote?

P.S. Damn you, The Walking Dead, for making me think about these completely improbable situations. Although it is 12.12.12, which means that the zombie apocalypse is likely right around the corner. Anyway on a brighter note, here are the top 10 books I said I’d save if indeed the zombie apocalypse rolls around. BOOKS VS ZOMBIES.

2 Comments on The Walking Dead and Existential Crazy Thoughts