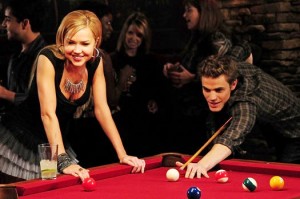 Episode of the chipmunk vampire. Ok, just kidding, I actually liked Lexi – she was quite spunky and sassy in her own way. And I LOVED how she was with Damon. Thought it sucked that they staked her.

Damon, Damon, Damon – what shall we do with you? Just when I was falling for your sexiness, it gets undermined by your callous deviousness. I do have to admit though, that that show of power by Stefan made him shoot up a ton in my hotometer.

Damon (after Stefan stakes him just shy of his heart): “You missed.”

Yowzer! We definitely need more man-vamp Stefan! He was just getting way too broody so I’m really glad that the CW ramped it up a bit. I totally loved him taking control for once, and not getting the beat-down from Damon (even though Damon should have technically been stronger from drinking human blood).

I also predicted after the last episode (Haunted) that I thought Damon did a little more to Jeremy than just erase his memories about Vicky. And now even Elena suspects that he has done something more. I said it before and I’ll say it again: Damon has his own agenda, and he’s only out for Damon. Even his own brother confirmed it, “You never do anything for anyone but yourself.” I’m sure there’s much more to come…