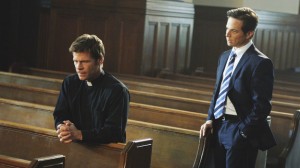 Checked out the latest V episode on ABC.com tonight. Not bad at all. It’s definitely gaining some momentum, and had a bunch of knee-jerk moments. Like the human experimentation with the “needle” table-cage. That was some serious coolness, well not for the human victim of course. That torture table was sick.

Before writing anymore, I have to say that I absolutely cannot stand Chad Decker. All I want to do is punch him in his smug little dimple over and over and over again. Seriously, for Fifth Column, when Father Jack told them that Chad was the one who told Anna about the attack on the shuttle, they should still have been suspicious. But they just believed Father Jack when he said he’s an ally. I’m not sure. I still think he’s Anna’s little cabana boy.

Loved that Lisa cares enough for Tyler that she broke up with him so he wouldn’t do the live-aboard program. Hated that her mother punched her in the face and told her to say she got attacked by Fifth Column just to try to get Tyler back. And then she tells a sentry to break her legs. That was just cold. Way cold.

Great episode! Now that there’s an FBI-driven task force to hunt down the Fifth Column that Erica is heading up, things can only get more exciting. They need to add more cool people to their little Fifth Column group.

V airs on ABC on Tuesdays at 10pm EST.