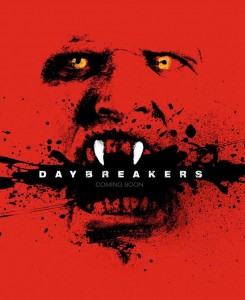 About three things I was absolutely positive: 1) Edward was a vampire, 2) Edward had fangs, 3) Edward became one hot human that I am totally in love with (yum).

I love the fact that the main vampire’s name is Edward. That was classic. I wonder if it was intentional?

First things first – great movie! Daybreakers was totally deserving of its 65% rating on Rotten Tomatoes! The six second guy was right – no sparkles, just lots of blood, gore, and colored contacts. Oh wait, and humans taking back their right to life. Definitely no shortage of blood and guts here – it’s almost as bad, I mean as good, as Zombieland! 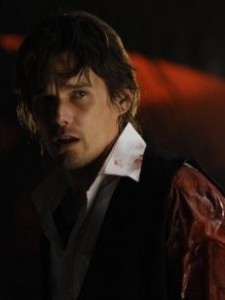 Great concept for a movie especially in a time where books and other media have romanticized and popularized vampires as being sexy, mysterious, and hot. But the question is – do they remain that way in a world where everyone is a vampire? I think not. Ethan Hawke proves that when he makes the transformation back to a human. He is a hot human! Far hotter than he was as a vampire, with cool human hair! The movie does give you some awesome perspective – when everyone’s immortal and has super-strength and super-speed, then being a vampire becomes boring. There’s nothing special there. It also makes you think about what being a vampire actually is – they are parasites who need a host to survi

ve, the host being you, the human. And when you’re being hunted by a locust-like swarm of starving vampires, suddenly they’re not so sexy. They’re fricken scary!

Like Zombieland which portrays a world overtaken by zombies, Daybreakers goes for the world overrun by vampires. Humans in both are the minority. Unlike Zombieland‘s zombies which really only want to find fresh meat, the vampires in Daybreakers are corporate and greedy and driven by capitalism. In the end though, when the human source dries out, those formerly hot vamps become pretty gross mutants, and only really want to find fresh blood. So technically they’re the same. Flesh-eating, blood-sucking predators. Let’s not forget that. 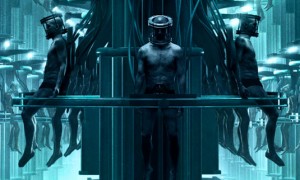 The opening of the film showcases some cool scenes on how life has evolved to support a night lifestyle as opposed to living during the day. There are cool cars with “daytime video driving modes” and community security sunrise alerts. And you buy your coffee with a shot of hemoglobin instead of half-and-half. Toss in a couple of fang-whitening ads and it’s vampire central!

In this vampire nation, Ethan Hawke (Edward) is the chief hematologist for a vampire conglomerate that hunts and “farms” the remaining humans for blood. He is trying to develop a blood substitute before they all starve and turn into deformed, mutated vampires who’ll eat anything, other vampires or themselves included. Edward hooks up with a group of humans and discover that there’s a cure, namely the sun frying a vampire until it shocks the heart back into life. Believable? Sure, it is. And then the fat lady sings big-time because one bite of a re-turned human, and bam! “Humanism” conquers “vampirism.” Talk about the awesome reverse infection concept! 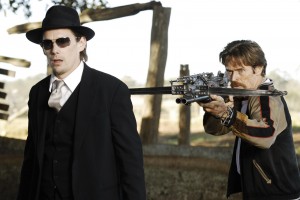 The action scenes were great. A bunch of times I literally jumped out of my seat, heart in my mouth. I absolutely LOVED Willem Dafoe’s character. He had some great one-liners that made me laugh out loud.

When Ethan Hawke asks him how it felt to be in the sun when he got re-turned, he replies “I felt like a goddamn piece of fried chicken!”

Or how about when Ethan asks him whether they are safe, and Dafoe says, “Being safe in a world full of vampires is like bare-backing a five dollar whore.”

Hilarious! His dry delivery was perfect and a nice complement to some of the more graphic horror-driven scenes, like staked exploding vampires. Blech. 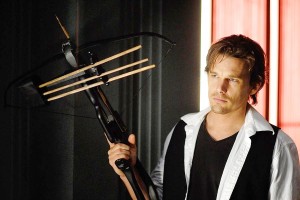 Daybreakers was a pleasant surprise. Kudos for a low-budget, under-the-radar film that takes back some of the vampire “chutzpah.” This “Team Edward” has fangs, blood, and takes the “hot human” back to the forefront. It erases some of the cheesy romanticism and brings back some of the thriller/horror feel to this genre, and that’s good.

I give Daybreakers 3 and a half out of 5 stars.