Not a bad Vampire Diaries episode…a lot of set up for future episodes. I had to admit that I totally called Jeremy’s new friend as being a vampire (no one can be that pushy without wanting something), but I didn’t guess Ben (the bartender) at all. And Bonnie seems to be falling right into that trap! It seems like Damon is not the only one trying to get Katherine out of that tomb. Speaking of Katherine, looks like she had quite a few friends….um, minions, of her own. As the vampire who got staked said to Damon and Stefan, “did you think you were the only ones?” Naughty, naughty. 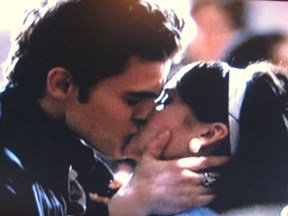 The part where Stefan did the dance move and the kiss with Elena was awesome! I loved all of the almost bite scenes where Elena is saved right at the last minute, and especially the fact that she fights back after the last attack with a pencil, no less. Stefan is starting to get a little more guts which is cool, and I like that he has Damon guessing. I enjoyed seeing them working together for once, it was a cool dynamic. I really want to find out what is the deal with Alaric – especially now that we know that his wife’s name was Isabelle, which was supposedly Elena’s birth-mother’s name. Like I said, a lot of build-up for future episodes.

So where is this all going? I can only say somewhere good! I cannot wait for next week’s episode when we get a glimpse of Katherine, some fangs, and some real vamp-itude. Sweet!

3 Comments on The Vampire Diaries: Unpleasantville