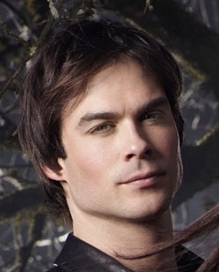 Loved this episode! Damon by far is my favorite because not only is he smoking hot and sexy, but his biting wit just keeps getting better and better. I laughed out loud when he calls Stefan “Count Deepak.” Hilarious!

I thought that Vicky made things a lot more interesting in this episode, and the bite scene with Jeremy was very exciting and bad-sexy, especially when she licks the blood from his mouth. Vampilicious! It was really too bad that she had to die – it would have been good to see her used more as a vampire (gets a little boring with just the brothers).

The only part which didn’t work for me was where Stefan, as in uber-careful, super-cautious Stefan, leaves Elena alone (when he goes to get more blood for Vicky) with a newly-turned and supposedly unpredictable vampire. If he cared about her so much, he would never have done that. Too much of a glaring error to me.

Finally, Stefan got a little more personality in this episode, although Damon’s the one who ultimately comes to the rescue in the end. Love when he shows his “sensitive” side! Still, don’t be fooled. Damon is out for Damon, “You confuse me for someone with remorse.”

The Vampire Diaries airs on Thursdays at 8pm eastern on the CW.