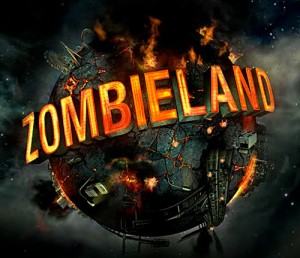 Zombieland definitely lived up to its 89% tomato-meter rating on Rotten Tomatoes. It was AWESOME! Let me start by saying I am the furthest thing from a zombie fan you will ever find. Night of the Living Dead gave me nightmares for years when I was a kid – when you’re fourteen and dreaming of half rotten corpses chasing you for fresh brains, it’s not like you go looking for zombie films of any kind. Period. It was a major feat to even get me to go see Shaun of the Dead, which I ended up quite enjoying despite the miles and miles of gore.  “Oh, my God! She’s so drunk!” I still chuckle at Shaun and Ed thinking the zombie chick in their back yard is drunk out of her mind.

That said, I do have to say however, (and I know some will disagree), that I loved Zombieland WAY MORE than Shaun of the Dead. Although the main character Jesse Eisenberg was more or less a wannabe Michael Cera, the quirky writing and the rapport between the four main characters more than made up for that after the first ten minutes. Woody Harrelson was fantastic, as bad ass as he was in Natural Born Killers, just with a sense of humor, a talent for killing zombies, and a manic obsession with Twinkies. Zombieland was certainly bloody enough – picture a wife chewing on her husband’s intestines and then cracking his arm bone to suck out the marrow in all its graphic gory glory. Next picture a soccer mom in a minivan being chased by a fai

ry princess party – 12 year old princess zombies? You got it. Notwithstanding the ample display of blood and guts, Zombieland was also a feast of comedy that had me laughing throughout. Add in a surprise cameo appearance by Bill Murray and a hilarious reenactment of Ghostbusters, and you’ve got some sheer comic genius. I laughed until my sides hurt. To top everything off, there’s also a sweet cat and mouse romance between Columbus (Jesse Eisenberg) and Wichita (Emma Stone from Superbad), that gets cemented when he changes rule #17 – Don’t be a hero to Be a Hero by literally hammering a zombie clown (see insert) to save his love. You also won’t be disappointed by the awesome music soundtrack.

All in all, blood and guts and flesh-eating zombies aside, I give Zombieland a double-tap thumbs up. As Tallahassee says, “nut up or shut up!” GET THERE.

1 Comment on Zombieland Review – Nut Up or Shut Up!